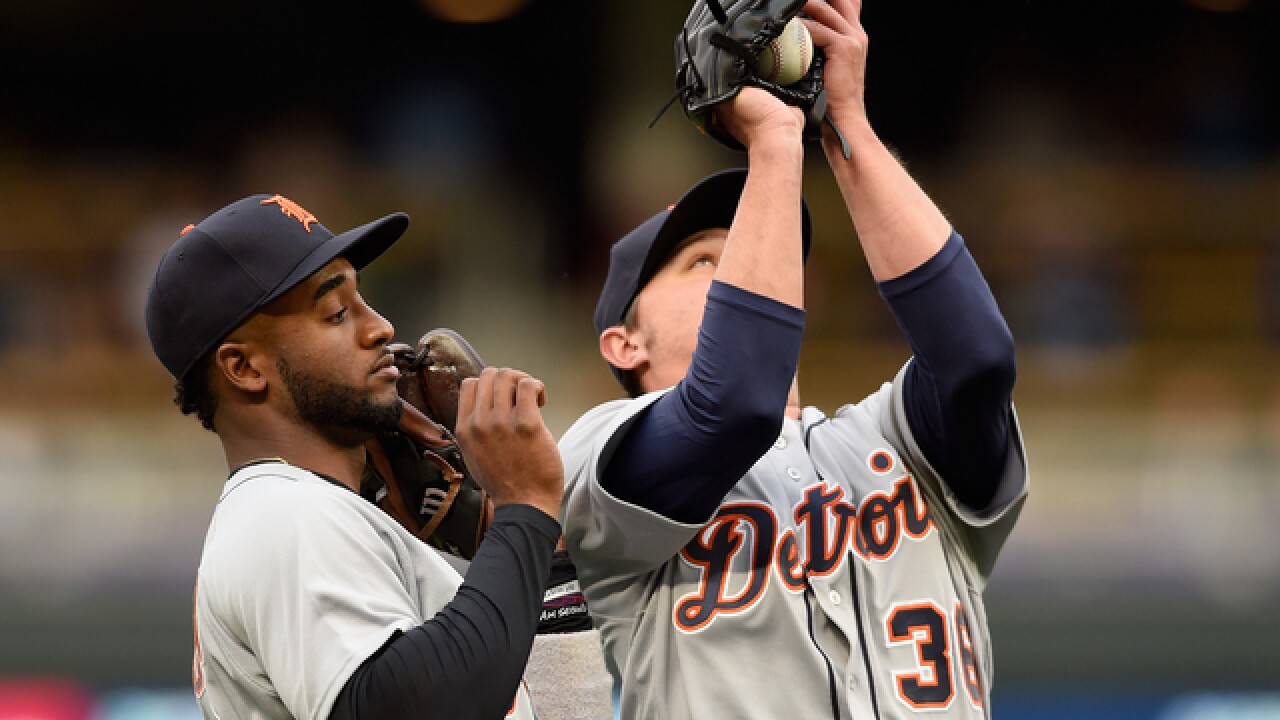 MINNEAPOLIS -- Logan Morrison forced in the go-ahead run with a four-pitch walk in the eighth inning after striking out in his first three at-bats, propelling the Minnesota Twins to a 4-2 victory over the Detroit Tigers on Monday night.

Fernando Rodney closed for his 10th save in 13 tries. Rodney, whose first eight seasons of his major league career were with the Tigers, has converted eight straight saves in 10 consecutive scoreless innings.

The more relevant reunion was the return of Tigers manager Ron Gardenhire to Minnesota, where he managed the Twins for 13 seasons. This was the first game between the division rivals since Gardenhire was hired by Detroit.

Nicholas Castellanos gave the Tigers a 2-0 lead with a home run to straightaway center field in the first inning and a two-out RBI single in the third, both hits on first pitches. Berrios retired 15 straight batters after that to sail past the seven-inning mark he's reached in half of his 10 starts.

Max Kepler hit a two-run double in the fifth off Tigers starter Blaine Hardy to tie the game and nearly gave the Twins the lead that inning, but he was ruled out at home trying to score on Eduardo Escobar's two-out single to left field. The original safe call was reversed by replay review that declared catcher James McCann's tag clipped Kepler's back just before his leg slid across the plate. Kepler thought his drive off the tall wall in right-center was going to reach the seats, and his admiration might have cost him a triple.

Morrison made sure that potential mistake didn't matter by keenly watching Tigers reliever Daniel Stumpf (1-3) throw four straight balls with the bases loaded after Gardenhire elected to intentionally walk Mitch Garver. Eddie Rosario's double sparked the rally after a one-out walk by Escobar. Robbie Grossman tacked on a sacrifice fly when Rosario startled the Tigers by tagging on a pop out to shallow right field and scoring without a play at the plate.

Hardy finished five innings without a walk in his second major league start, allowing seven hits and the two runs with four strikeouts.

Tigers: 1B Miguel Cabrera (strained right hamstring) is still being brought along slowly, following his first on-field batting practice action on Saturday since the injury occurred 2 1/2 weeks ago. "But he's actually feeling really, really good," Gardenhire said. ... 3B Jeimer Candelario (left wrist tendinitis) could start a rehab assignment this week. "The smart thing might be to get him some real action here and not just BP," Gardenhire said.

Twins: 1B Joe Mauer was back at the ballpark after staying home over the weekend with a sore neck and concussion-like symptoms. "He's doing a little better," manager Paul Molitor said. ... 3B Miguel Sano (strained left hamstring) was slated to play his first full game on Tuesday on his rehab assignment with Triple-A Rochester.

Tigers: LHP Matthew Boyd (2-3, 3.19 ERA) pitches on Tuesday night. He has completed at least six innings in seven of his eight turns this season, with five starts allowing two runs or fewer.

Twins: RHP Lance Lynn (1-4, 7.47 ERA), off to an abysmal start with his new team and coming off his shortest appearance of the season, takes the mound in the middle game of the series. He gave up three runs on four hits and four walks in three innings last week in a loss to the Cardinals.