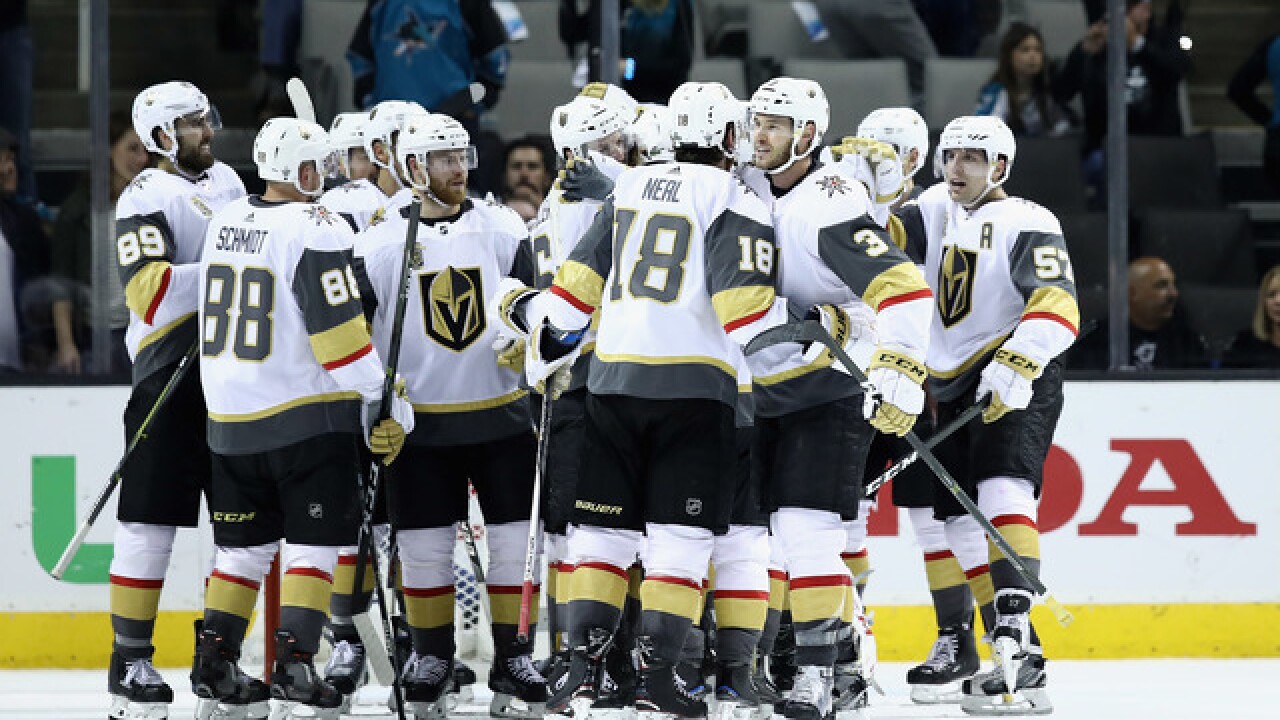 Copyright Getty Images
Ezra Shaw
<p>SAN JOSE, CA - MAY 06: The Vegas Golden Knights celebrate after they beat the San Jose Sharks to win Game Six of the Western Conference Second Round and win the series during the 2018 NHL Stanley Cup Playoffs at SAP Center on May 6, 2018 in San Jose, California. (Photo by Ezra Shaw/Getty Images)</p>

SAN JOSE, Calif. (AP) -- Marc-Andre Fleury made 28 saves in his fourth shutout of the playoffs and the expansion Vegas Golden Knights are headed to the Western Conference Final in their inaugural season after beating the San Jose Sharks 3-0 in Game 6 of their second-round series Sunday.

Jonathan Marchessault opened the scoring, Nate Schmidt added an insurance goal that was only detectable by replay and Cody Eakin sealed it with an empty-netter to help Vegas become just the third team in NHL history to win multiple series in its first season.

The Toronto Arenas won the Stanley Cup in the first postseason in league history in 1918 and St. Louis won two rounds to win the all-expansion West Division in 1968.

The Golden Knights relied on a crew of castoffs, led by a goalie who was part of three Stanley Cup-winning teams in Pittsburgh before headlining a new team. Fleury posted shutouts in Games 1 and 6 against the Sharks and was also spectacular in an overtime win in Game 3.

Next up for Fleury and Vegas will be the Western Conference Final against either Winnipeg or Nashville. The Jets lead that series 3-2 heading into Game 6 on Monday night.

The Sharks had numerous opportunities all night but were thwarted by a couple of shots that hit the iron, some acrobatic saves from Fleury and other chances that trickled just wide. This marked the fourth straight postseason for the Sharks that ended with a loss on home ice.

The Golden Knights took control of this game with some good fortune in the second period. It started when usually reliable Marc-Edouard Vlasic turned the puck over in his own zone. Reilly Smith took control near the blue line and found Marchessault alone in front for a goal that trickled between Martin Jones' pads.

Vegas nearly added to the lead when Smith had a shot at open net that San Jose forward Chris Tierney blocked from the crease. But Fleury made sure the Sharks couldn't capitalize on that momentum when he stopped Tomas Hertl.

The Golden Knights then added to the lead after an icing by Brent Burns led to an offensive zone faceoff. David Perron beat Tierney on the draw and Schmidt took a shot that appeared to deflect off the post and out.

Play went on for 25 more seconds before the buzzer rang, with the situation room in Toronto calling for a video review. That quickly showed that the puck bounced off the post, off a piece equipment inside the net and out.

Vegas then had a delayed celebration for the goal that made it 2-0.

The Golden Knights then smothered the Sharks for most of the third period with Fleury getting some help again when Burns' point shot hit the post with about six minutes left. Fleury then rubbed the post in appreciation at the next stoppage.

The Sharks came out fast with Hertl drawing an early penalty and the team generating numerous chances. But none of those opportunities could beat Fleury, who got some fortunate bounces to go his way.

Hertl hit the crossbar on a partial breakaway and Logan Couture whiffed on a rebound attempt with an open net. Evander Kane had a deflection hit the cross bar in final minute of the period. He raised his hands in celebration, thinking he had scored, and that might have cost him a chance at knocking in a rebound.

San Jose had a handful of other deflections that Fleury was either able to stop with an acrobatic move or trickled just wide as the teams played just their second scoreless first period of the series.

NOTES: Jones made 30 saves. ... Vegas F William Carrier was scratched with a lower-body injury and replaced by Ryan Reaves, who played his first game this postseason.