Johnny Manziel signs with CFL in path back to football 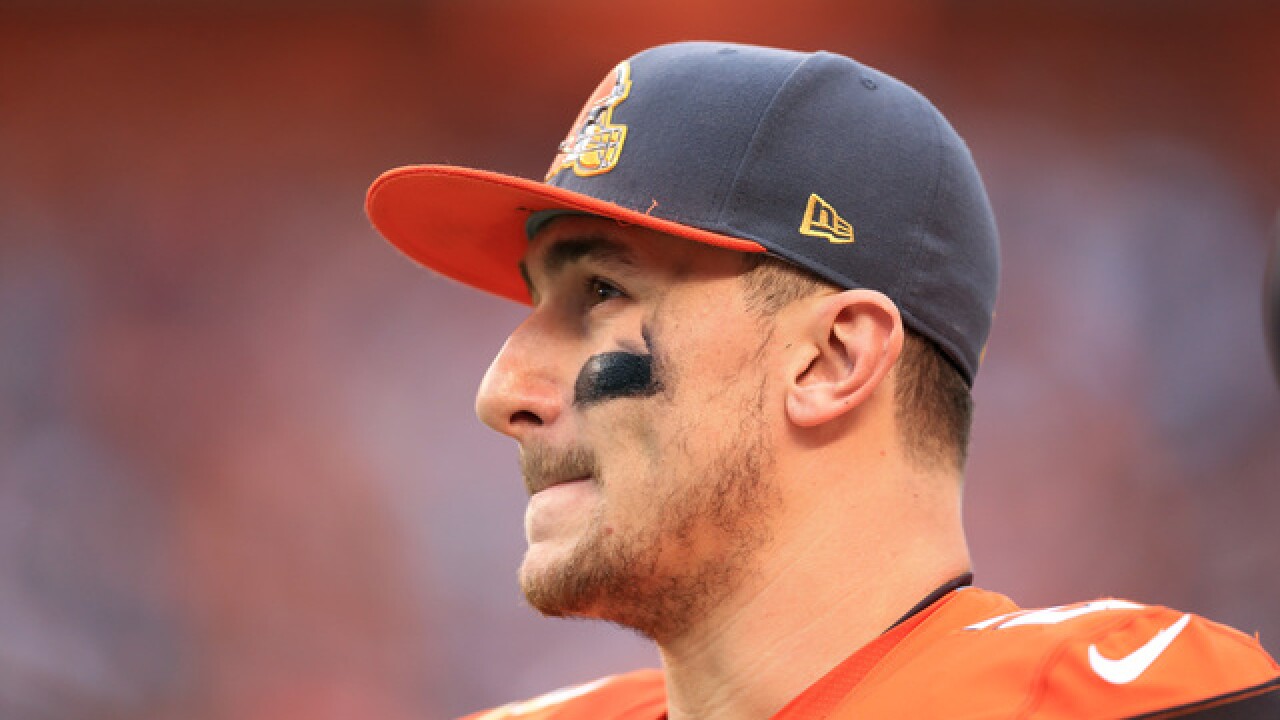 Copyright Getty Images
Andrew Weber
<p>CLEVELAND, OH - DECEMBER 13: Quarterback Johnny Manziel #2 of the Cleveland Browns on the sidelines during the fourth quarter against the San Francisco 49ers at FirstEnergy Stadium on December 13, 2015 in Cleveland, Ohio. (Photo by Andrew Weber/Getty Images)</p>

HAMILTON, Ontario (AP) -- Johnny Football is huddling up again for a long-awaited comeback -- in Canada.

Heisman Trophy winner Johnny Manziel signed a two-year contract with the Hamilton Tiger-Cats of the Canadian Football League on Saturday, looking to salvage his football career after a turbulent and unsuccessful stay with the Cleveland Browns.

"I don't want to wait around anymore," Manziel said during a news conference at Tim Hortons Field, where he will play his home games this season.

The decision to head north of the U.S. border to play football ended months of speculation on his possible path back to the game.

"I want a chance to get on the field and get into the locker room and get a chance to play ball again," Manziel said. "This isn't just a pit stop for me. I'm not coming here to get what I need to go back down to the NFL. I've signed into this for the long haul, for two years.

Manziel actively pursued an NFL contract this offseason and played in the developmental Spring League last month, his first action in organized football since the 2015 NFL season. He now comes to a team coached by June Jones, a former NFL and college quarterback and coach. Players report to training camp Sunday.

"I don't know what two years down the road looks like for me," Manziel said. "Maybe I come up here and I love it and I don't want to go anywhere. We'll play it by ear and take it day by day, like I've been doing."

The 25-year-old quarterback won the 2012 Heisman Trophy at Texas A&M, and was selected in the first round -- No. 22 overall -- in the 2014 NFL draft by the Browns. He was released in March 2016 after posting a 2-6 record over two tumultuous campaigns.

This offseason, Manziel threw during pro days at both Texas A&M and the University of San Diego, and participated in The Spring League -- a development circuit for players overlooked by the NFL.

"He has the ability to play at any level he wants to play at," Jones said. "He's ready to get that challenge done and accomplish what he knows he can do."

Manziel is not guaranteed a starting spot with Hamilton, though. He's the fifth quarterback on the roster, joining Jeremiah Masoli -- who was named the starter when Jones took over as coach late last season -- CFL veterans Bryant Moniz and Vernon Adams Jr., and Dane Evans.

"I want to play, as anybody does," Manziel said. "I know there's talent in our quarterback room and I respect the guys we do have. I know there's going to be a learning curve and I'm going to have to take some time. I have realistic goals to come in, learn the offense, learn the game and hopefully my talent and making some throws and doing some things I feel I can do on the football field will show."

Jones echoed Manziel's comments, and reiterated that Masoli remains the Tiger-Cats' starter as of Saturday.

"Let me tell you something right now: He has got his work ahead of him to beat out Jeremiah," Jones said of Manziel. "Now, I am a firm believer, even when I was in the NFL, I wanted three quarterbacks that had started and played in the NFL. You can't have too many quarterbacks because you're one play away."

Manziel has dealt with several off-field issues. In 2016, a domestic assault charge against Manziel in Dallas was dismissed after he took an anger management course and participated in the NFL's substance-abuse program. In a recent interview, he said he's been diagnosed with bipolar disorder and has stopped drinking.

The CFL has a policy on violence against women. The league said in a statement that in December it began a process to determine if Manziel could join the league. Manziel had to meet certain conditions, including an assessment by an independent expert on domestic violence, a review by legal counsel and a discussion with Commissioner Randy Ambrosie.

The league said it informed Manziel and the Tiger-Cats it would approve his signing. He must, however, continue to meet the specified conditions to "maintain his eligibility."

In January, after signing a three-year contract to remain Hamilton's coach, Jones gushed about Manziel's potential.

"I think he'd be the best player to ever play up here," he said. "He can throw it and he can run it like nobody ever has been able to do."

Manziel is arguably the highest-profile NFL player to come to the CFL since 2006, when running back Ricky Williams joined the Toronto Argonauts. And with 2.23 million followers on Twitter, Manziel has no shortage of people interested in every move he makes -- on and off the field.

But Manziel said he's in a much better place in his life now than he was when he first entered the NFL.

"I remember the day I got drafted," he said. "I was probably a little hesitant on the team I was going to and where I was going. It was a big jump and a lot of uncertainty from the system I ran in college to what the NFL system was going to be when I walked into the building the first day.

My situation here, I've completely accepted this team and where I'm at that this is my best opportunity to get a chance to go out on the field and be a part of a team. I've done a lot of things in my personal life. I've worked extremely hard in the physical and football aspects of my life. I feel like I'm in the best place that I've been mentally and physically in my life."