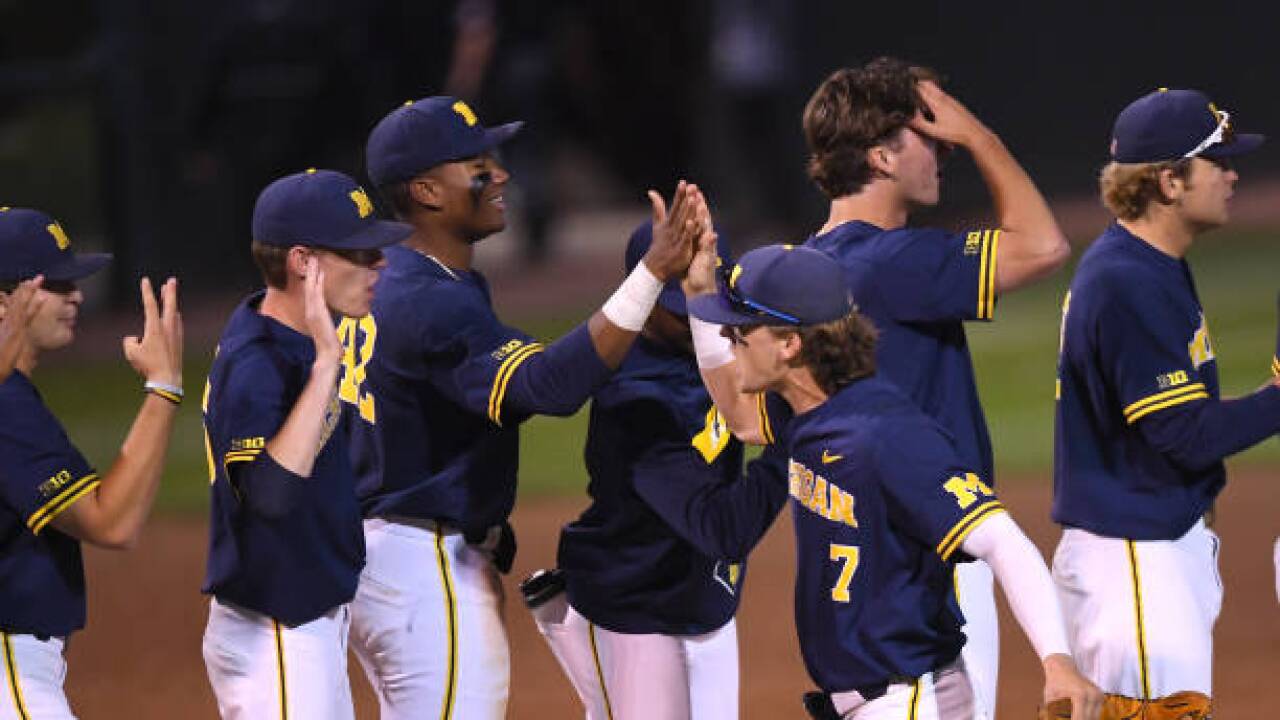 Jayne Kamin-Oncea/Getty Images
LOS ANGELES, CA - JUNE 07: Jesse Franklin #7 of the Michigan Wolverines gets high fives after the final out of ninth inning of game 1 of the NCAA Super Regional against the UCLA Bruins at Jackie Robinson Stadium on June 7, 2019 in Los Angeles, California. The Michigan Wolverines defeated the UCLA Bruins 3-2. (Photo by Jayne Kamin-Oncea/Getty Images)

LOS ANGELES (AP) -- Ako Thomas drove in two runs with a single, Tommy Henry pitched seven solid innings and Michigan is headed to the College World Series for the first time in 35 years after defeating top-seeded UCLA 4-2 on Sunday night in the deciding game of the Los Angeles super regional.

It will be the 46-20 Wolverines' eighth CWS appearance but their first since 1984. It is also the first time since Indiana in 2013 that the Big 10 has had a team advance to Omaha.

UCLA (52-11) is the seventh national top seed since the current format started in 1999 to not make it to the College World Series. The last time it happened was 2015 when the Bruins were eliminated in regional play.

Thomas' one-out single up the middle off Kyle Mora (3-3) in the fifth inning drove in the deciding runs. Henry (10-5) -- who was selected by the Arizona Diamondbacks in the second round of last week's MLB draft -- allowed two runs on seven hits while striking out six.

Christian Bullock added two hits and scored two runs for Michigan. The junior left fielder tripled to left center to lead off the ninth and added an insurance run when he scored on Joe Donovan's sacrifice fly.

The Wolverines struck first in the second. Blake Nelson walked with one out, advanced to third on Bullock's double and scored on a fielder's choice by Jack Blomgren. The Bruins tied it in the second when Jake Pries homered to left-center off Henry.

UCLA took a 2-1 lead in the third when Garrett Mitchell tripled to right and came home on Ryan Kreidler's groundout.

Jeremy Ydens had three hits for UCLA. Nick Nastrini started for the Bruins and yielded two runs on one hit.