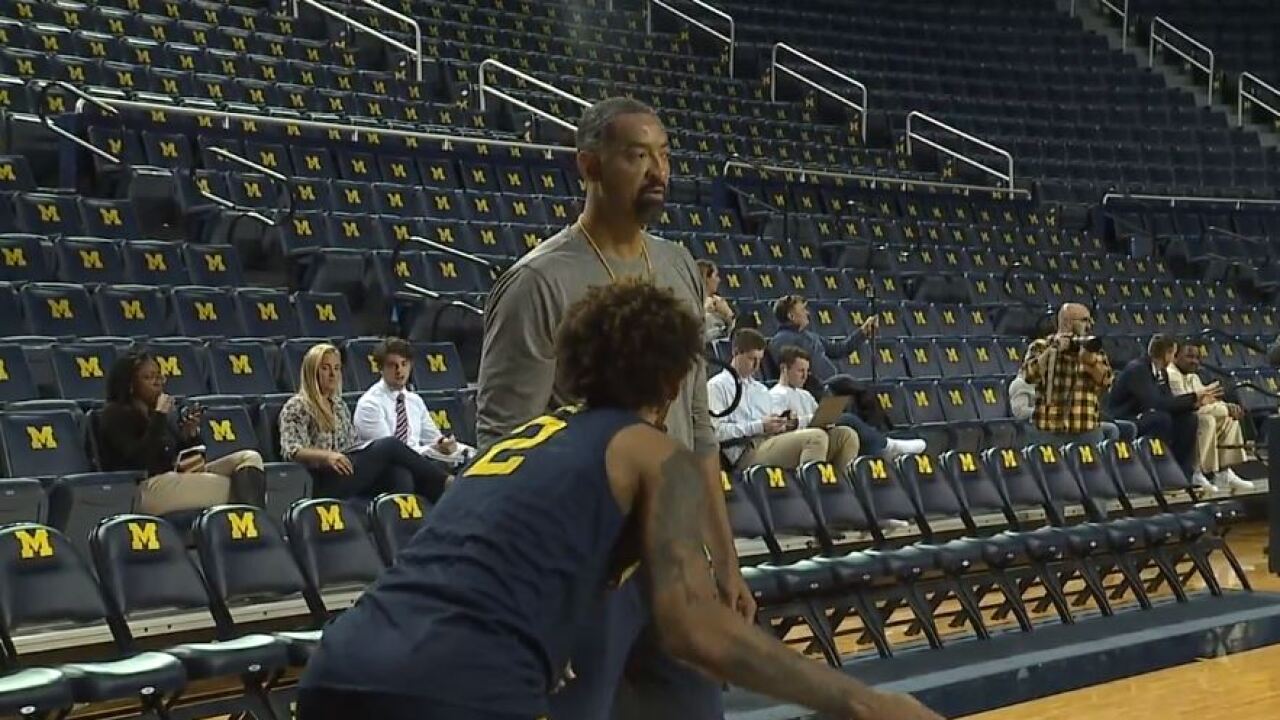 ANN ARBOR, Mich. (AP) — When asked if anything about his new job has surprised him, Michigan coach Juwan Howard mentioned recruiting.

"I knew you have to recruit, but all the work that comes behind the recruiting. Like I haven't talked on the phone in years. What we all do now is just text, right? Or email," Howard said. "I've been on the phone sometimes with recruits for like 30 minutes. ... You've got to do a really good job with your text game, too. A lot of kids like to text."

Juwan Howard on the challenge to add his own culture to what John Beilein built: "It's not challenging at all."

"I mean it from my heart: Coach Beilein, his criteria on recruiting players has worked." pic.twitter.com/n87NlFcnyu

Michigan held its men's basketball media day Thursday, another first for Howard as he prepares for his initial season at the helm. The former Fab Five star returned to his school after coach John Beilein left for the NBA this offseason.

Hours after his media day news conference, Howard had a recruiting victory when Isaiah Todd of Word of God Christian Academy in North Carolina chose Michigan in an announcement streamed on WRAL.com. Todd is ranked 12th overall among 2020 recruits at 247sports.com.

Howard has big shoes to fill after Beilein led Michigan to two Final Fours and returned the school to relevance both in the Big Ten and nationally.

"I don't expect my players to trust me. I want to earn their trust," Howard said. "I want them to know that I'm in their corner 110%, and that has to be proven by my actions, not just my words."

The Wolverines have to replace some key players from last season's Sweet 16 team. Iggy Brazdeikis, Jordan Poole and Charles Matthews all left early for the NBA draft.

As Howard noted, recruiting is a big part of his job — and it will likely play a significant role in his success or failure. Under Beilein, Michigan wasn't necessarily beating out Kentucky and Duke for the top-ranked high school prospects, but the coaching staff excelled at identifying talent and developing players.

It remains to be seen how Howard and his staff will do in those regards, but landing Todd was a sign that the program's brand is strong — and that the new coach is plenty capable of selling it.

Although there are rules governing what coaches can and can't say about their recruiting efforts with specific players, Howard was asked at media day to explain how he pitches Michigan to young prospects.

"Michigan — this block 'M' right here — it's a beautiful university, one of the best institutions in the world," Howard said. "I went to watch Franz play ... in Greece, and it wasn't, like, Athens, Greece. We were like, in the mountains. ... There was a Michigan block 'M' shirt — that right there speaks for itself."