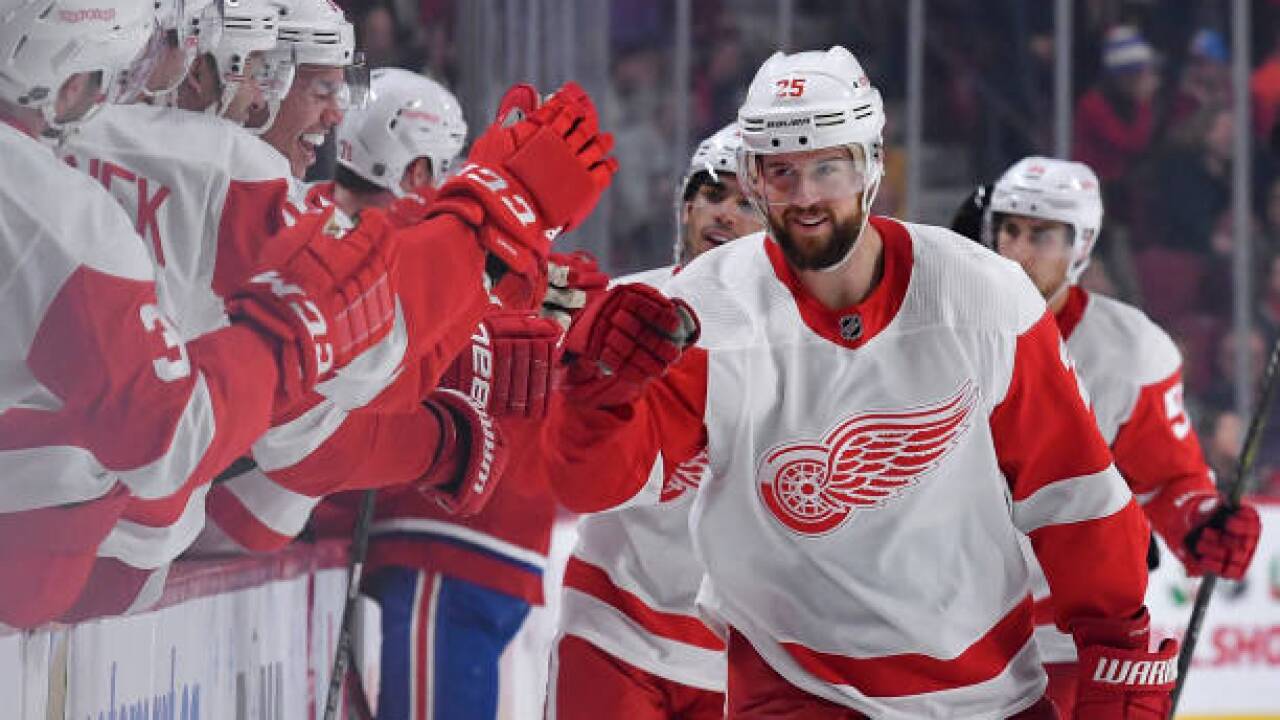 MONTREAL (AP) — Mike Green scored a power-play goal in the third period, Jonathan Bernier made 42 saves, and the Detroit Red Wings held off the Montreal Canadiens 2-1 on Saturday night.

Tyler Bertuzzi also scored for the Red Wings (9-22-3), who have won two games in a row since dropping 12 straight. Green also added an assist and his goal was the game-winner when Tomas Tatar scored in the game’s final minute for the Canadiens (15-12-6).

Montreal outshot Detroit 43-20 but had its three-game win streak snapped. Carey Price made 18 saves in defeat.

The Red Wings snapped a 12-game winless streak (0-10-2) by beating the Winnipeg Jets 5-2 on Thursday but entered the Bell Centre with the league’s worst record and worst offense.

Detroit took a 1-0 lead at 3:21 of the first period on Bertuzzi’s 11th goal of the season. Dylan Larkin stole the puck from Montreal defenseman Shea Weber behind the Canadiens net and fed a wide-open Bertuzzi in the slot.

The game remained close until Green scored at 7:42 of the third on a power play. He fooled Price blocker side with a one-timer from the point that went off the post and in. Riley Barber was serving a slashing penalty.

The Canadiens had their chances, though, before Green’s goal.

Jordan Weal fired a shot off the crossbar in the first period and Joel Armia’s soft backhand hit the post in the second.

Bernier did the rest. The Laval, Quebec native denied Phillip Danault on a short-handed breakaway in the first. He made key saves on Brendan Gallagher and Nick Cousins, from the slot, in the second.

With Montreal exerting pressure in the third, the Red Wings goalie made his best save of the night on rookie Nick Suzuki, a glove stop while sprawled out on the ice.

Tatar scored for Montreal with 47 seconds remaining in the third.

Bernier earned his second victory against the Canadiens this season after a 4-2 triumph in Montreal’s home opener.

NOTES: Wings leading goal scorer Anthony Mantha, who missed the previous eight games with a lower-body injury, was back in the lineup. Winger Andreas Athanasiou also returned from injury after missing two games. ... Gallagher and Danault’s five-game point streaks came to an end. … Price had allowed one goal in each of his previous two starts.