Venus Williams goes out as Roger Federer marches on at Wimbledon 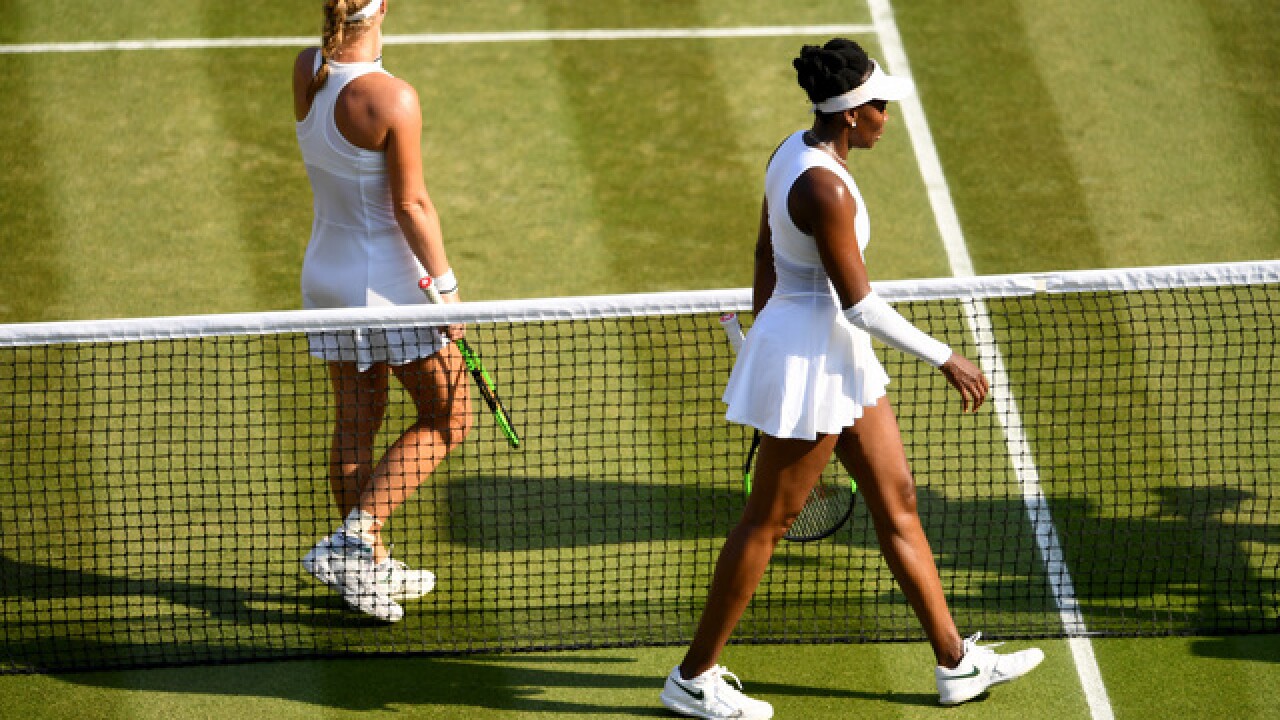 Copyright Getty Images
Clive Mason
<p>LONDON, ENGLAND - JULY 06: Venus Williams of the United States walks off court after as Kiki Bertens of the Netherlands celebrates winning her Ladies' Singles third round match on day five of the Wimbledon Lawn Tennis Championships at All England Lawn Tennis and Croquet Club on July 6, 2018 in London, England. (Photo by Clive Mason/Getty Images)</p>

LONDON (AP) -- Venus Williams became the latest former champion to be knocked out at Wimbledon.

Her sister Serena is still going strong, though, after overcoming her toughest test so far this week.

In the men's tournament, Roger Federer's latest victory never looked in doubt as he won 37 of 40 first-serve points and stretched his Wimbledon winning streak to 29 sets, beating Jan-Lennard Struff of Germany 6-3, 7-5, 6-2.

Venus couldn't complete a third consecutive comeback as she lost to 20th-seeded Kiki Bertens of the Netherlands 6-2, 6-7 (5), 8-6 in the third round on Friday.

"Just ran out of time in the end," Venus said. "She played really well. You have to win the last point, and I didn't succeed in that today."

She is the fourth former women's champion to get knocked out, joining Maria Sharapova, Petra Kvitova and last year's winner Garbine Muguruza.

That leaves Serena as the only remaining woman to have won the tournament. The seven-time champion came from a break down in the first set to get past Kristina Mladenovic 7-5, 7-6 (2).

Venus had rallied from a set down in her first two matches. Her exit means eight of the top 10 seeded women have gone out before the end of Week 1.

The 38-year-old American, last year's runner-up, was the oldest women's singles entrant in 2018.

Serena took her Wimbledon winning streak to 17 matches, thanks in part to 13 aces. She missed last year's tournament while pregnant.

She faces another mother in the fourth round Monday: 120th-ranked qualifier Evgeniya Rodina of Russia, who upset No. 10 seed Madison Keys of the U.S.

"Serena is my idol," Rodina said. "So it will be great to play against her."

Keys also came up short with a comeback attempt after fighting back from a set and two breaks down, losing 7-5, 5-7, 6-4.

In a match full of big swings, Keys led 5-2 in the first set before Rodina won the next nine games to go 4-0 up in the second.

The American player won five games in a row to level and then broke back to make it 4-4 in the third set, but Rodina earned another break to secure victory.

Rodina, through to the fourth round of a Grand Slam for the first time, was 0-15 against top-20 ranked opponents before Friday's win.

Zverev also erased a 2-1 deficit in sets three times to reach the quarterfinals of the French Open, his best result at a Grand Slam.