Detroit's booming tourism industry is attracting millions from around the world 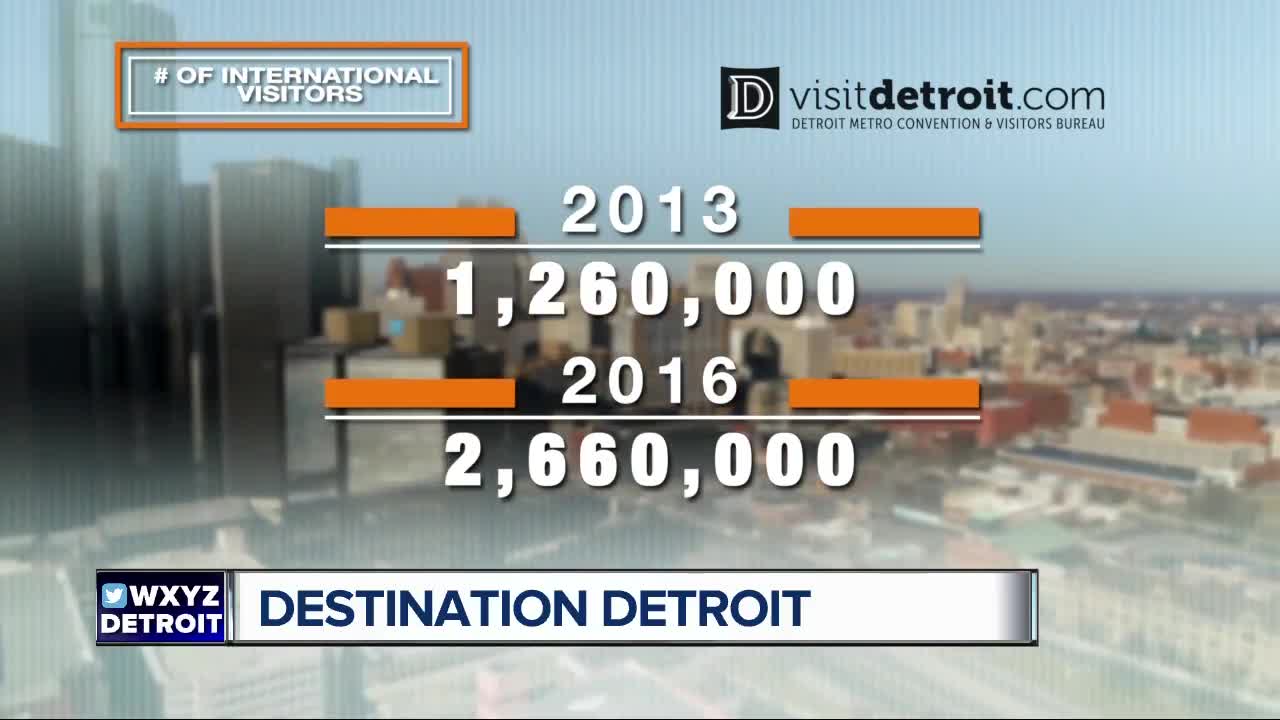 DETROIT (WXYZ) — At a time when foreign countries are issuing travel warnings to their citizens about the United States, there is a growing interest in experiencing Detroit!

The number of people traveling to the area from other countries has more than doubled in the same time.

“You don't hear in Germany that Detroit is such a great city,” says Eva Straub. She was in Detroit visiting her sister Monja Rommel who moved to the area a few months ago for her husband’s job.

Monja had concerns of her own about Detroit.

“Is a dangerous city that's what I saw on the internet,” says Monja Rommel.

But the word is out, change is happening.

Our tour guide, Dildora Damisch, is fluent in six languages and understands 10. She owns the Multi-Lingual Detroit Motown Tour Company

“This year I cannot believe, I am booked every single day! And people coming from all over the world! Unbelieveable,” says Damisch.

The Detroit Metro Convention and Visitors Bureau’s latest data shows the number of people visiting Detroit from other countries has more than doubled in three years.

There were people from New Zealand, Russia, Germany and Iraq on my tour which began with Detroit’s rich history. Literally.

The Cathedral of Finance it was once called, also know as the Guardian Building.

The ceilings were made to absorb sound for privacy, the mural made to inspire a formula for success in Michigan.

“And you see on the scale, money and success come together. How we can be successful in Michigan: farmers, industry, mining and water transportation."

And then Dildora takes us walking through downtown, because she can.

And many ways Detroit set examples that many other big cities followed.

“Guys, look at this building. It reminds you of what?"

The architect of 1 Woodward, later used a similar design to build the World Trade Center’s twin towers in New York.

Dildora Damisch took us to Campus Martius, Hart Plaza, the Underground Railroad Statue, the Riverwalk, the GM Building aka Ren Cen and a number of new businesses.

She shares many in depth numbers, facts and historically accurate background on every site we see. She also has the inside scoop on current and future development.

Her tours are customized to a particular groups needs and desires. There are too many highlights in Detroit to show them all off at once.

As the tour progressed, perspectives changed.

“The Detroit river is really nice, the riverwalk, a lot of really nice places,” says Rommel.

“And visiting an old abandon building which is renovated right now and turned to boutique hotel,” Rommel and her sister were very impressed with the Shinola Hotel and the Monarch Club.

"I didn't expect the city to be like it is, it's really amazing! I'm really impressed how it is,” says Rommel.

“And that you have such beautiful places, like this rooftop bar,” says Straub admiring the view from the Monarch Club atop the restored Metropolitan.

“It wasn't on my list to go here, but now we got the chance to see the city and I really would recommend to come here,” says Straub.

“The city is alive! It's so exciting and my business is up which means people coming to Detroit!” says Damisch.

Dildora Damisch gives incredible tours of the city in English and in 5 other languages. You can find more info here: https://detroittowntour.com

Detroit Bruce gives behind the scenes tours specifically highlighting the work of Bedrock Detroit’s more than 100 downtown endeavors. They are free. www.detroitbruce.com

Feet on the Street gives tours of the restaurant and food scene in Detroit. www.enjoytheD.com

The Detroit Bus Company does bar tours and a variety of historic tours of the city by bus. www.thedetroitbus.com

The Detroit Experience Factory offers a wide variety of tours and is a great resource in downtown. www.detroitexperiencefactory.com