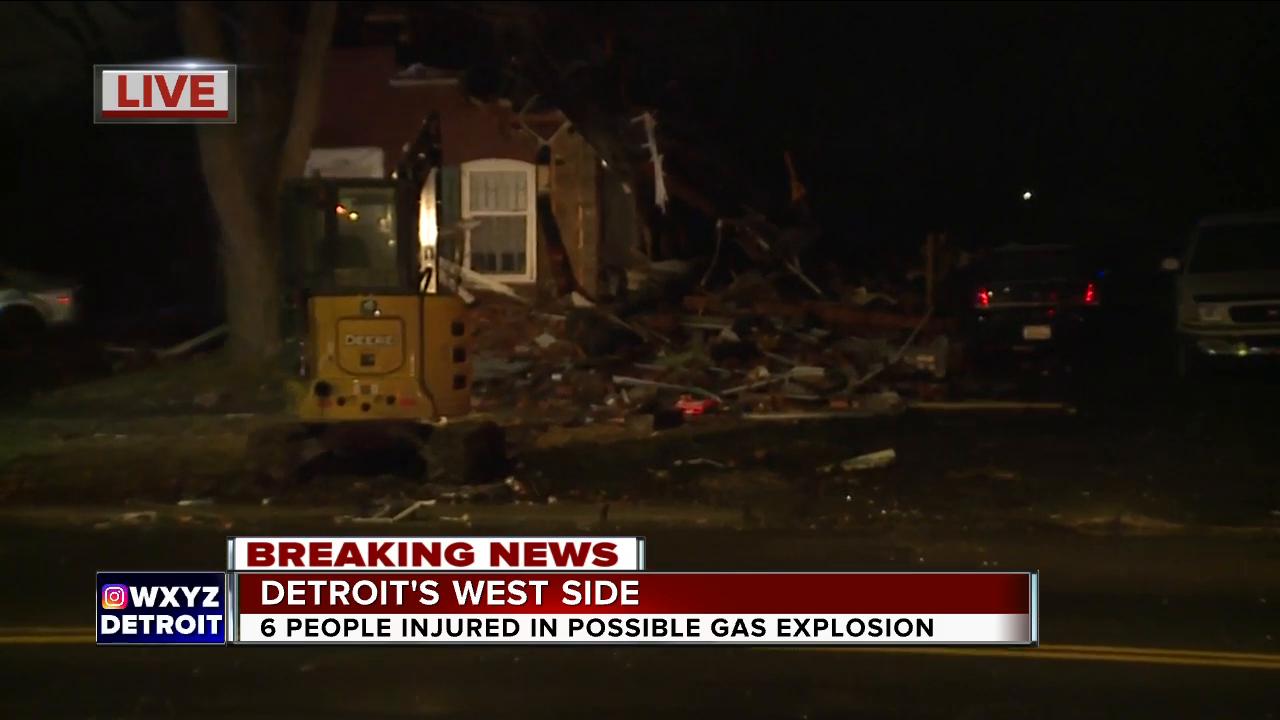 DETROIT (WXYZ) — A fire and house explosion that sent six people to the hospital Saturday evening has been ruled a natural gas explosion, according to fire officials.

"We will need heavy equipment to move the debris before we can pinpoint the actual cause," said Detroit Fire Commissioner Dave Fornell.

The explosion turned the house into debris, and after rescuing six people, crews searched to find a dog.

"There was a ton of people trying to dig her out from underneath the debris. It was very intense," says Theresa Sumpter, the Director and Founder of Detroit Pit Crew.

Sumpter operates an animal rescue and got the call that a dog was trapped. She was live on Facebook for a small part of the intense 45 minute dig, as Detroit firefighters, ATF and DTE crew members along with others navigated in the dark, on uneven and unstable ground. Not knowing what they would find beneath the smoking rubble.

"People were literally just throwing bricks off of herI . saw a microwave, there was shingles, anything that would come off a house, siding, all of that was on top of her," says Sumpter. "At a certain point, they found a chain and they started pulling the chain and it led to her."

Amazingly, the dog was found alive, responsive and very happy to see people. She was taken to Advanced Animal Emergency to be checked out.

Dr Alex Pollock, a veterinarian, says "Miracle," which is the name they've given to the dog, has a fractured pelvis.

Due to the nature of the break, surgery won't be needed, just cage rest and she should fully recover. Despite breathing smoke and soot, her lungs are healthy and she isn't having any breathing problems.

Looking at what’s left of the home "miracle" once lived in, it is truly amazing not only that 6 people survived the blast and the blaze, but that even the smallest occupant, buried under rubble, made it out alive and is expected to fully recover.

"Imagine how many pounds of weight it was, all that fell on her, quickly! That she didn’t sustain more injuries, she is truly a miracle," says Sumpter.

If you'd like to support her care and the Detroit Pit Crew: https://detroitpitcrew.com/

A GoFundMe has been started to help the family.