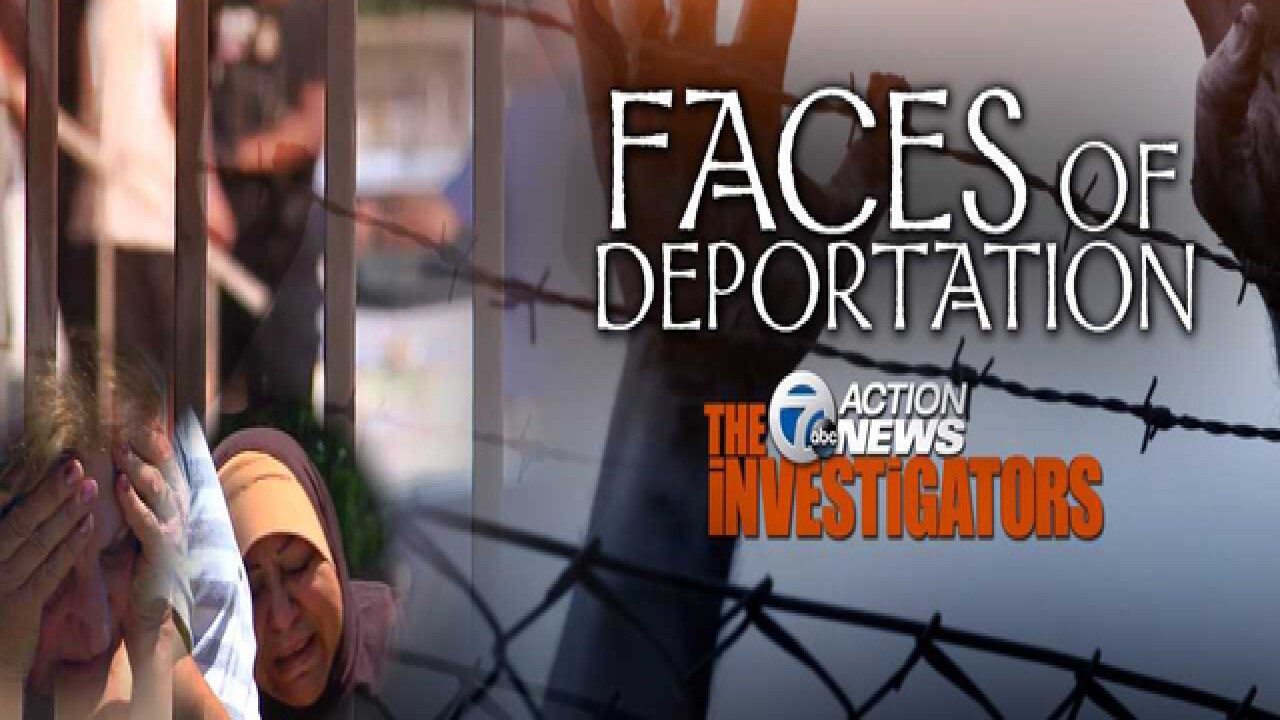 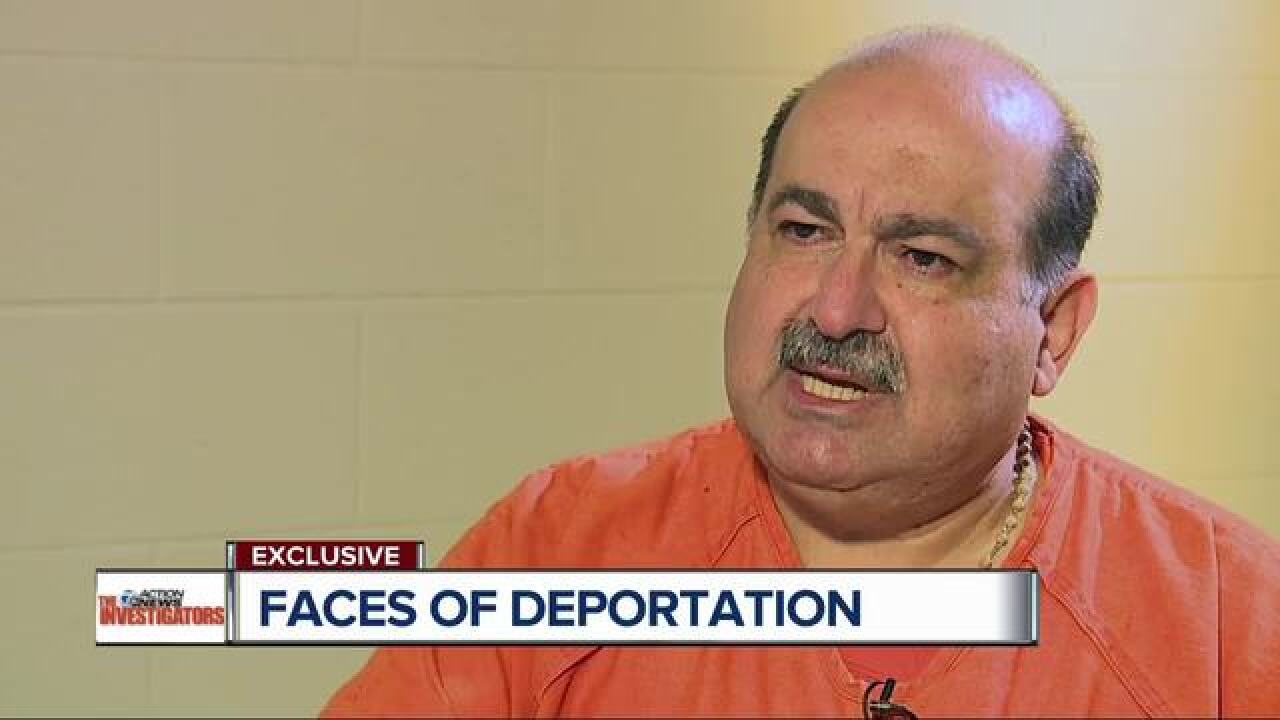 The immigration debate has put metro Detroit’s Chaldean community in the spotlight.  More than 1400 Iraqi nationals are now facing deportation after living here for years.  The U.S. government says many of them have criminal convictions, and now Iraq will finally accept them back.

Even if someone who emigrates here desperately wants to become an American, if you’re convicted of a crime, often you can not become a citizen.  That’s exactly what happened to some of the people who were recently locked up in Southeast Michigan.  Now they’re asking the Governor, the courts, and even the President to look beyond what it says on their paperwork.

Immigration and Customs Enforcement, or ICE, agents rounded up nearly 200 men and women recently to send them back to Iraq.  The move sparked protests and outrage from their families and community leaders, who argue sending that sending them back will mean death or torture in Iraq.

They were loaded them on buses and shipped them off to jails across the country.

Some, like Louis Akrawi, have been convicted of murder and assault.

But for others, when you look beyond the labels in their records, like felony assault or fraud, another story starts to emerge.

“My dad-- I know isn’t a criminal. I know he made a mistake and he completely took advantage of the second chance he was given,” said 20-year-old Britanny Hamama.  “I think this country needs more people like him.”

Brittany Hamama and her siblings, along with their mom, pray for their dad every day at St. Thomas Chaldean Catholic Church in West Bloomfield.

“For the people that know Sam Hamama, they adore him because he’s done so much more good than bad in his life time,” said Hamama’s wife, Nahrain, as she wiped away tears.  “He doesn’t deserve to be sent to a country where there’s going to be torture, persecution, genocide. That’s not who we are as Americans to send people there to be murdered, to be persecuted.”

In 1986, Usama “Sam” Hamama got into a road rage incident.  In order to get the other driver to back off, Hamama says he pointed an unloaded gun at him.

The result: he was convicted of felony assault, felony firearm, and carrying a pistol in a motor vehicle. After spending a year in prison, Hamama turned his life around.  He runs a grocery store in Harper Woods, raises money with his church for Chaldean refugees, and mentors not only his own four children, but his 40-some employees as well.  Hamama says he often buys cars for his workers who don’t have transportation, and allows them to slowly pay him back over time.  He says he also helped raise money so the Harper Woods Police Department could start a K9 Unit.

The idea of being deported back to Iraq – a country he barely remembers – is terrifying.  He doesn’t speak Arabic, he has serious heart problems that require multiple medications, and he fears for his family if they lose their breadwinner.

“How do you take that person out of an equation and expect this family to survive humanely,” said Hamama in an exclusive interview with 7 Investigator Heather Catallo inside the St. Clair County Jail.  “I’ve always paid taxes. I’ve been a productive person in society. I just made a mistake. One mistake. Not two, not three. One mistake.”

Last month, Hamama had just finished his application for a pardon from Governor Rick Snyder so he can fight his deportation order when ICE agents arrested him.  Hamama says, prior to that, he’d been reporting regularly to ICE agents.

Hamama’s family fled Iraq when he was just 4-years-old.  He has a tattoo of a cross on his wrist, and says if he’s sent back to Iraq, his Catholic faith will make him a target for ISIS and other groups.

“There is a real and genuine fear of persecution,” said his attorney Bill Swor.  “But it’s not just a Christian thing… If they go back to Iraq, they will be identified as Americans and persecuted.”

The fear of death and torture is so real, Hamama says he’d rather stay in jail than be deported.

“I never really knew how it felt to be taken away from my mom and now I do.  And it feels like I really have nothing,” said 15-year-old Lexy Solyman, on of Jihan Asker’s three children.  She also fears for her mother’s life if she’s sent back to Iraq.

Asker’s parents brought her to the U.S. when she was 5-years-old.  Her lawyer says, immigration officials ordered Asker to be deported after she failed to show up at a hearing when she was 10 years old.

Mann says Asker’s only criminal conviction is a 93-day misdemeanor from 2003 for trying to cash a bad check.  After she finished probation, the conviction was removed from her record.   But it still counts as a crime for immigration authorities.  Mann says Asker has been reporting regularly to immigration officials.

“She has remained in the United States because for 31 years, they let her remain.  Every year she was going there and she led to believe that was okay,” said Mann.  “In order for her to have gotten the green card, she would have had to hire a lawyer and pay thousands of dollars in legal fees, and from our understanding, being a single mother, it was difficult for her to get the money.   And there was no urgency because for 31 years, everything was fine.”

Asker is now behind bars, leaving Lexy without a guardian.

As a Catholic Chaldean, Lexy fears deporting her mother would be a death sentence.

“They’re going back home to get killed,” said Lexy through tears.  “People change, people don’t stay the same, people learn from their mistakes.  Well, at least my mom did.  And I’m sure plenty of others did too and they don’t deserve this.”

“Jamil Hamama, an unlawfully present citizen of Iraq, was arrested June 11, by ICE officers at his residence in West Bloomfield, Michigan, without incident.

He has prior felony convictions for assault with a dangerous weapon, felony firearm, and firearms possession of a loaded firearm in or upon a vehicle.

An immigration judge ordered him removed in 1994— a decision that was subsequently upheld after an appeal to the Board of Immigration Appeals.  He will remain in ICE custody pending removal from the United States or further action on his immigration case.”

A federal judge in Detroit has stopped the deportations until the courts can take a closer look at the individual cases.

In his ruling on Tuesday, U.S. District Court Judge Mark Goldsmith said, “This court concludes that to enforce the congressional mandate that district courts lack jurisdiction – despite the compelling context of this case – would expose petitioners to the substantiated risk of death, torture, or other grave persecution before their legal claims can be tested in a court.”

"While ICE is currently reviewing this decision to determine next steps, I am disappointed that the court's decision fails to take into account the robust and already-existing procedural process to address Petitioners' claims as well as the clear public safety threat posed by these aliens - the vast majority of whom are convicted criminals. The criminal history of these aliens includes convictions for homicide, rape, aggravated assault, drug trafficking, sex assault and many other types of offenses. The dedicated men and women of ICE will continue to do our sworn duty to enforce our immigration laws and protect the safety and security of Americans."

You can see more of our interviews with the Hamama family in the embedded video players below, or by cycling through the media items at the top of this article.