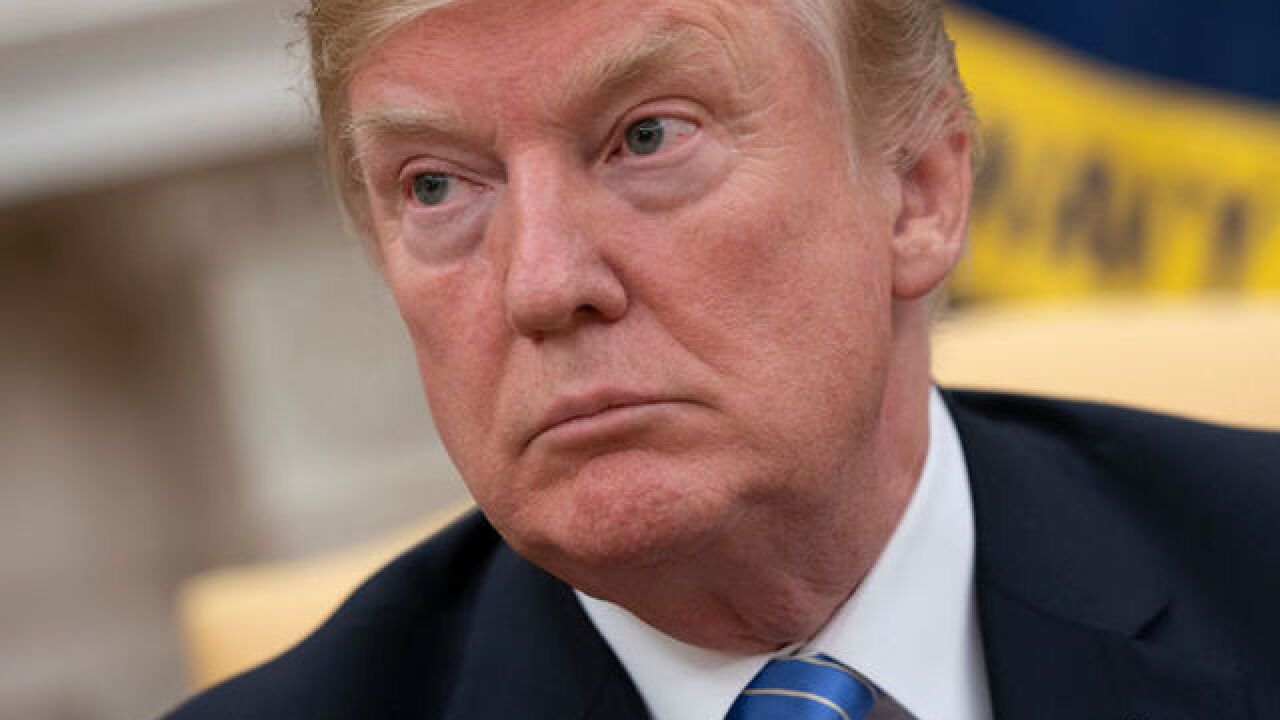 Image copyright 2018 Getty Images. All rights reserved. This material may not be published, broadcast, rewritten, or redistributed.
Pool
<p>United States President Donald J. Trump participates in a meeting with the Prime Minster of The Netherlands, Mark Rutte, at The White House in Washington, DC, July 2, 2018. </p>

President Donald Trump is demanding that Norway ramp up its defense spending as a NATO partner, according to a letter he wrote to Prime Minister Erna Solberg that was obtained by CNN.

The letter was one of a series that Trump sent to NATO allies, including Germany, Belgium, Canada and others, demanding they boost spending and threatening to shift the US military presence in Europe if they do not. The letters were first reported in The New York Times on Monday.

The letters fit a pattern of Trump critiques of NATO, particularly of defense spending by other members. NATO members committed to spend 2 percent of their gross domestic product on national defense at a 2014 summit in Wales, and Trump has repeatedly bemoaned that NATO allies have not fulfilled this commitment.

In advocating for increased defense spending, Trump joins his predecessors Barack Obama and George W. Bush, both of whom also lobbied NATO allies to spend more on defense. Robert Gates, who served as defense Secretary under both Obama and Bush, warned in 2011 that the US could lose interest in NATO if allies did not increase investment in their militaries.

In the letter to Solberg, Trump writes, "Norway is the 'eyes and ears' of the northern flank" of NATO yet "remains the only NATO Ally sharing a border with Russia that lacks a credible plan to spend 2 percent of its domestic product on defense."

"I understand domestic political pressures, as I myself have expended considerable political capital to increase our own defense spending," the letter says, also asking for a "strong recommitment by Norway" to meet agreed-upon goals.

The White House declined to comment on presidential correspondence, but a National Security Council spokesman told CNN, "The President is committed to the alliance, as he has stated repeatedly. The President has also been clear we expect our allies to shoulder their fair share of our common defense burden and to do more in areas that most affect them. There is no better way to signal NATO's resolve than for every ally to allocate the resources necessary to share their burden of our collective defense."

Norwegian Defense Minister Frank Bakke-Jensen defended his country's commitment to meeting defense spending goals in a statement on Tuesday, noting that burden-sharing will be a key issue at the upcoming NATO summit in Brussels.

"Our investment share is currently at 27 percent, well above the NATO target. This has allowed for investments in important capabilities, such as the F-35 combat aircraft, P-8 maritime surveillance aircraft and submarines in order to increase Allied and Norwegian security," the statement said.

"The government has recently decided that a premise for the next long term plan will be to further increase Norway's defence spending towards the 2 percent goal. Burden-sharing will be a key issue at the NATO Summit in July, and Norway looks forward to continued discussions on this issue," it added.

Tensions between the Trump administration and Europe are reaching a fever pitch ahead this month's NATO summit, on the heels of Trump's announcement of tariffs against European allies and his comments denouncing the transatlantic alliance.

"There is a Trump's hell where NATO is as bad as NAFTA and EU worse than China," a senior European official said. "The transatlantic relationship, which all around the table we consider a given, is not a given."

The official added, "We now have a major crisis."

The official's comments came after the G7 meeting in Canada last month, when Trump told the G7 leaders that "NATO is as bad as NAFTA," according to a diplomat from a G7 country. Axios was first to report Trump's remark, which stands in stark contrast to the sunny image US officials try to convey as they insist that relations with Europe are just fine.