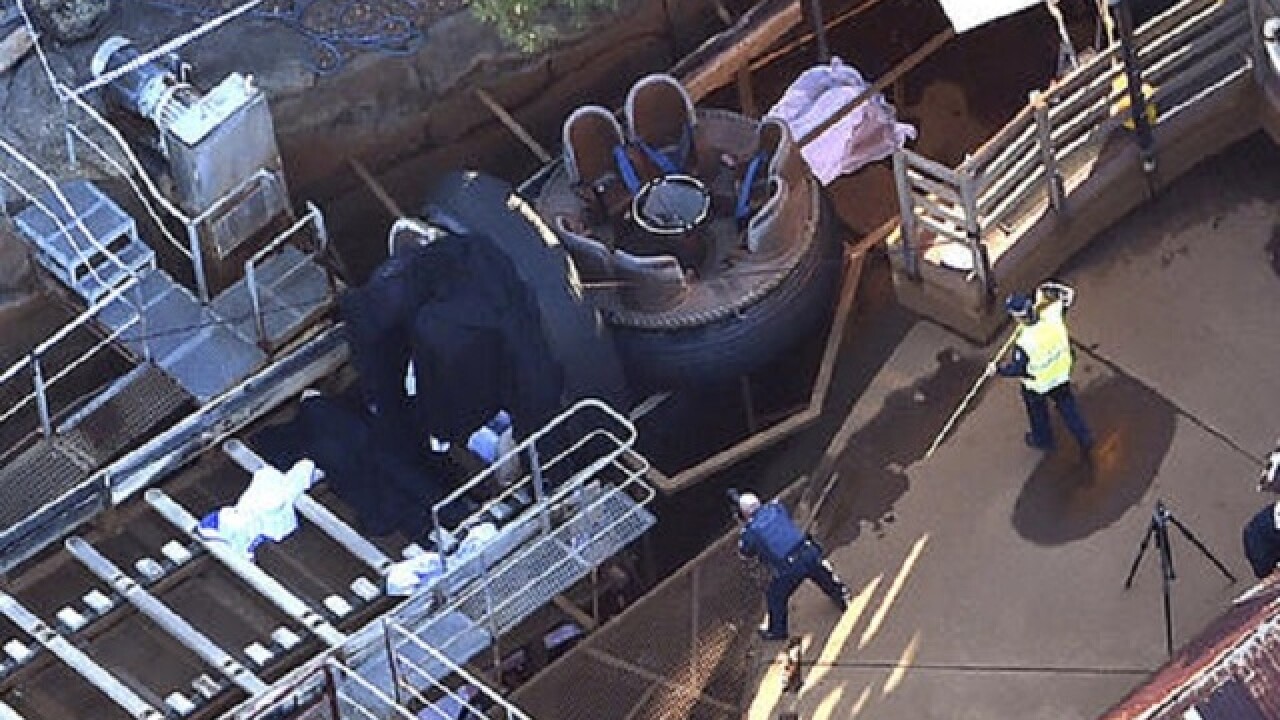 Dan Peled
<p>Queensland Emergency Services personnel are seen at the Thunder River Rapids ride at Dreamworld on the Gold Coast, Australia, Tuesday, Oct. 25, 2016. Four people died after a malfunction caused two people to be ejected from their raft, while two others were caught inside the ride at the popular theme park. (Dan Peled/AAP via AP)</p>

SYDNEY (AP) — Two young children are fortunate to be alive, police said Wednesday, after they were thrown clear and survived an accident that killed four people on a river rapids ride at a popular theme park in Australia.
Two men and two women died in the accident on Tuesday at Dreamworld, a park on Queensland state's Gold Coast, Queensland Police Assistant Commissioner Brian Codd said.
The Thunder River Rapids ride whisks people in circular rafts along a fast-moving, artificial river, with a conveyor belt helping move the rafts through the water. Closed-circuit television footage showed the ride was coming to its conclusion when two rafts collided, Codd said.
"One has flipped backward and it has caught and tossed some of the people that were on the ride backward into the conveyor belt," Codd told reporters.
The two children, a 10-year-old boy and a 12-year-old girl, who shared the raft with the victims were thrown clear and managed to escape, he said.
"In terms of how they escaped, maybe through the providence of God or somebody, but it seems from what I've seen almost a miracle that anybody came out of that," Codd said. "If we're going to be thankful for anything, I'm thankful for that."
Codd would not explain the girls' relationship with the victims. They had been traumatized and were being cared for by family, he said.
Kim Dorsett, of Canberra, confirmed that two of the victims were her children: Kate Goodchild, 32, and Luke Dorsett, 35.
"I have three children and have lost two of them today — my whole family has been wiped out," she told The Courier-Mail newspaper on Tuesday.
Kim Dorsett was on a family vacation with her children and Goodchild's daughters from Canberra.
Police have declined to identify the other two victims, a 38-year-old man and a 42 year-old woman.
Media reports say the man was from Canberra and the woman was a New Zealand citizen who lived in Sydney.
Codd said police would investigate reports of problems with the ride earlier on Tuesday, as well as maintenance records and procedures.
Dreamworld would remain closed as a crime scene for two or three days. Charges could follow including criminal negligence, he said.
Dreamworld CEO Craig Davidson said the park was working with police to try and determine what went wrong.
"We are deeply shocked and saddened by this, and our hearts and our thoughts go out to the families involved and to their loved ones," Davidson told reporters.
Thunder River is considered one of Dreamworld's tamer, family-friendly rides, and is open to children as young as 2. The park has been open since 1981.
Copyright 2016 The Associated Press. All rights reserved. This material may not be published, broadcast, rewritten or redistributed.