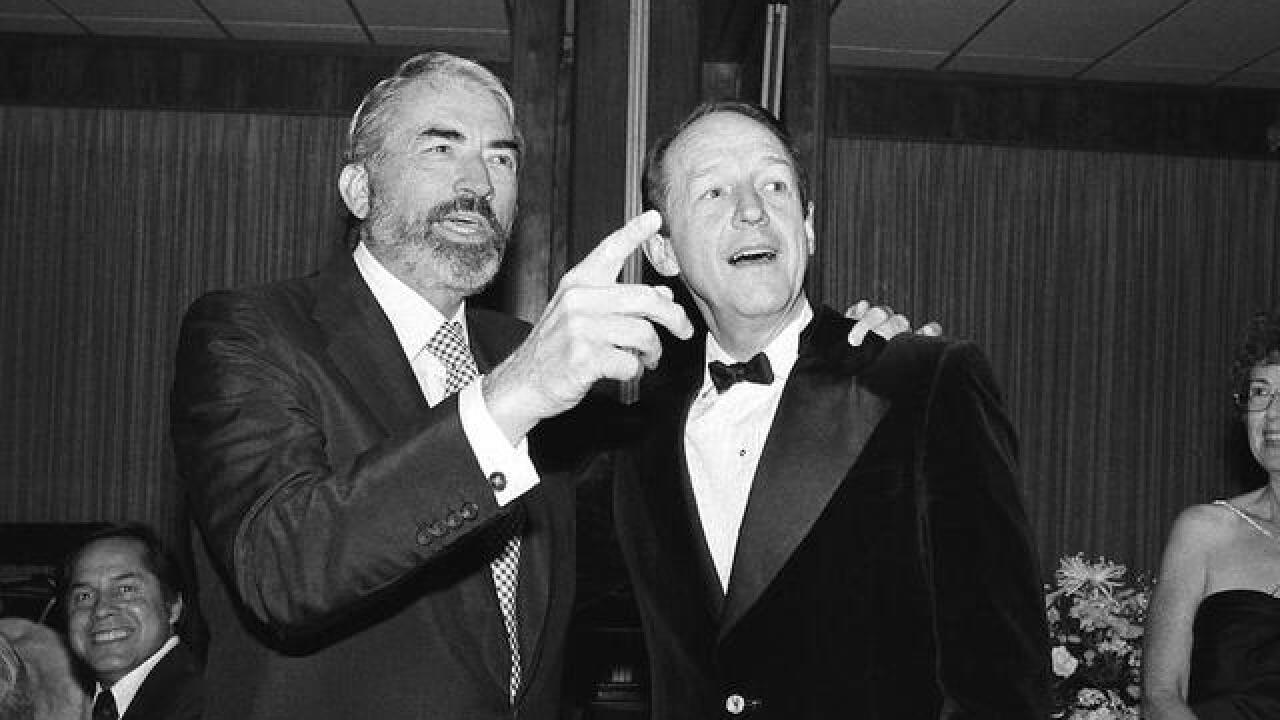 William Schallert, a veteran TV performer and Hollywood union leader who played Patty Duke's father — and uncle — on television and led a long, contentious strike for actors, has died.

Schallert died Sunday at his home in Pacific Palisades, California, said his son, Edwin. He was 93.

Though usually seen in secondary roles, Schallert's lean, friendly face was familiar to baby boomers for roles in two classic sitcoms — as a teacher to Dwayne Hickman and his pals in "The Many Loves of Dobie Gillis" and as the dad in "The Patty Duke Show."

"The Patty Duke Show" (1963-1966) was challenging for Duke, who had already achieved stardom on Broadway as the young Helen Keller in "The Miracle Worker" and repeated the role in the film, winning her a supporting actress Oscar. (Duke died in March at age 69.)

In the television series she played a double role, as Patty Lane, a typical American teenager, and as her cultured cousin, Cathy, who lives with Patty's family. Cathy was newly arrived from overseas, where, the theme song told viewers, she "adores a minuet, the Ballets Russes and crepes suzette." Patty just likes rock 'n' roll and hot dogs.

Schallert was cast as Patty's harried father (and Cathy's uncle), who was confused by the lookalike girls.

He was similarly frustrated as English teacher Mr. Pomfritt on "Dobie Gillis." The show, which ran from 1959 to 1963, starred Hickman as a teenager comically yearning for the perfect girl, and a strong supporting cast including Bob Denver as his beatnik pal, Maynard. "You ready, my young barbarians?" Mr. Pomfritt would ask his students, comically pining for the days of corporal punishment in the classroom.

In 1979, Schallert was elected president of the 46,000-member Screen Actors Guild, an honor held at one time or another by James Cagney, George Murphy, Ronald Reagan, Charlton Heston and other screen notables. Most of them had little to do but conduct meetings and issue statements. With Schallert it was different.

In 1980 he led the union as it staged a 13-week strike over such issues as actors' pay for films made for the then-new cable television industry.

He told the Los Angeles Times his message to actors was that "we have to respect ourselves as artists" and recalled the pre-union days when actors were sometimes expected to work until midnight and be back at work six hours later.

Schallert was defeated in his bid for a second two-year term as SAG president in 1981 by "Lou Grant" star Ed Asner, who had strongly criticized the agreement the union had reached to end the strike. Asner ran into his own controversies as SAG chief by taking stands critical of U.S. foreign policy, and he decided not to seek a third term in 1985. He was succeeded by none other than Schallert's former screen daughter, Duke.

Schallert said in 2008 that his greatest accomplishment as SAG president was the formation of a committee for performers with disabilities.

"We had established committees for all of the various ethnic minorities, women and seniors. I'm a big beneficiary of that right now because I'm 85 and I still work."

Among his later TV roles were guest shots on "Desperate Housewives" and "True Blood." In 2008, he played Supreme Court Justice John Paul Stevens in "Recount," HBO's Emmy-winning dramatization of the 2000 presidential election.

In all, Schallert appeared in hundreds of movies, television series and specials, playing characters and walk-ons. He was a messenger in "Singin' in the Rain," a Union soldier in "The Red Badge of Courage" and an admiral in "Get Smart." In addition to Justice Stevens, he played such real-life figures such as Gen. Mark Clark in "The War Years" and Gen. Robert E. Lee in "North and South Book II."

In an interview with the Los Angeles Times in 1966, Schallert lamented being cast as "the second man through the door," or supporting player.

"I did come close to a lead once," he said. "This was a pilot I made for a series named 'Filbert.' But when the producers calculated the series would cost $75,000 per episode, they figured a top name would be needed in the lead to assure success. So they gave up the project. It was a hard pill to swallow."

William Joseph Schallert was born in 1922, in Los Angeles. His father, Edwin, was drama editor of the Los Angeles Times from 1919 to 1958.

William spent his high school years in a seminary. After military service he graduated from UCLA and went to England on a Fulbright scholarship in 1952. He studied repertory theater and lectured on American theater at Oxford University.

In his early years he was a founding member of the Circle Theater in Hollywood. The director was Charlie Chaplin, whose son Sydney was a cast member.

Schallert recalled that after a preview performance Chaplin would suggest a couple of things to correct. "When it was about five or six in the morning," Schallert said, "Oona (Chaplin's wife) would say 'Come on, Charlie, let them go home. They've got a performance to do tonight.'"

Biographical material in this story was written by The Associated Press' late Hollywood correspondent Bob Thomas.