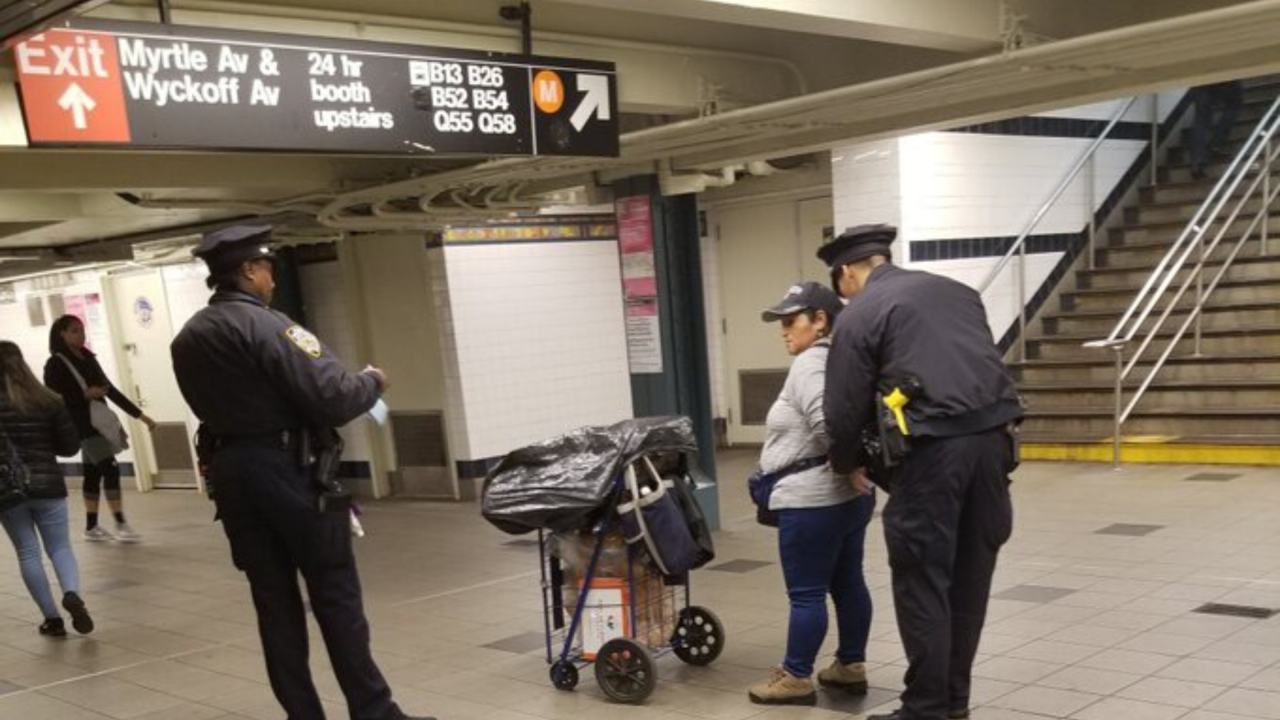 The protest came in the wake of a similar incident Friday when a churro vendor was handcuffed by four officers in a Brooklyn subway station. Both women received summonses from the New York Police Department.

Mayor Bill de Blasio defended the officers in a video posted to Twitter by Yoav Gonen with nonprofit news outlet The City. De Blasio said they “comported themselves properly.”

But Rafael Martinez, the man who witnessed Monday’s incident, called the mayor out.

“I witnessed a woman get arrested for selling churros this morning,” he tweeted. “She is simply trying to make ends meet. You are an embarassment [sic] to this city but it’s to be expected by you at this point.”

The 41-year-old vendor in Monday's incident has two outstanding warrants in Queens for failing to appear in court. They're both from previous summonses she was issued for unlicensed general vending.

"This unauthorized vendor was given a warning and told to leave the station. She returned a short time later," an NYPD spokesperson said. "Officers attempted to issue her a summons but discovered she had two open warrants. She was handcuffed, issued a summons, and taken to court to answer for her warrants."

They arrested another churro lady. This time Myrtle-Wyckoff ave station of the M and L. So this is what our city is cracking down on? pic.twitter.com/GHCWNsiZAA

A video of the woman who was handcuffed at a Brooklyn subway station Friday for selling churros went viral after being posted to Twitter.

The video, posted early Saturday morning, shows police officers speaking to the woman at the Broadway Junction station, where she was holding a cart of food that she was seemingly trying to sell.

Sofia Newman, an actress based in the city, according to her Twitter bio, wrote that cops gave the woman an ultimatum: either surrender the cart and receive a fine, or they'd take it from her and arrest her.

Tonight as I was leaving Broadway Junction, I saw three or four police officers (one of them was either a plainclothes cop or someone who worked at the station) gathered around a crying woman and her churro cart. Apparently, it's illegal to sell food inside train stations. 1/? pic.twitter.com/sgQVvSHUik

According to Newman's posts, the woman was cuffed and her cart was taken away.

According to the Metropolitan Transportation Authority website, it's illegal to sell or distribute food inside of the transit system.

She kept trying to speak to one of the cops in Spanish, but the plainclothes cop kept rolling his eyes and saying things like, "Are you done?" and "I know you can speak English." Eventually, they cuffed her and unceremoniously dragged her and her cart away. 3/? pic.twitter.com/qVIfN7DO7u

"She was instructed in English and Spanish that she would be issued a summons," a police spokesperson said, "and her property taken as evidence in accordance with procedure. She refused to cooperate and was briefly handcuffed; officers escorted her into the command where she was uncuffed. Her property was vouchered as arrest evidence and she was released within minutes."

"Our officers have been responding to number of recent complaints of violations at this station, including the unlawful and unlicensed sale of food and other products," he said.

But many feel the officers went too far.

"No matter what the law says," Newman wrote, "there is no reason why that many officers needed to encircle, demean, and police the poverty of that woman of color. It was an abuse of power, and yet another example of how broken our system is."

Back in September, the MTA announced plans to hire about 500 new transit cops, with the agency seeking to fix issues in the system impacting the “quality of life.”

The transit cops were intended to battle the increasing number of fare evasions and assaults on workers, as well as tackle the homelessness crisis to better the quality of life of all commuters.

Police also confirmed to WPIX that, as first reported by Gothamist, the woman had been issued multiple summonses this year for unlicensed vending at the Broadway Junction station, and police have fielded numerous complains about unlicensed vendors at that station in particular.

Politicians, city leaders and other notable New Yorkers shared the video with comments of their own.

Over-policing our subways isn’t going to solve anything. We can keep the subway safe without harming people just trying to earn a living. https://t.co/dtFz9JkTTl

So is this what our 500 additional transit cops are choosing to pursue? Terrorizing someone who’s just trying to make a living? This is excessive and heartless. https://t.co/1NWiXzyN94

Our team is heading over to Transit District 33 and I’m reaching out to the Chief of NYPD’s Transit Bureau to try to intervene on this woman’s behalf. Thank you for standing up! https://t.co/aDcS9oQ0IB

This petty infraction of rules shouldn’t have led to an arrest. Had responding officers been able to overcome the language barrier, this situation could possibly have been resolved. We are showing our failure to police in an increasingly multilingual city. https://t.co/Kj3GQr6p39

We don’t want your 500 extra cops in the subway Andrew Cuomo—and your crackdown on people of color for at best minor offenses must stop!

Videographer is admittedly swearing a lot, but appreciate people getting each other’s backs! #NoNewCops https://t.co/CeBXDaJLgF

This story was originally published on WPIX.