Cavs get hammered in Game 2 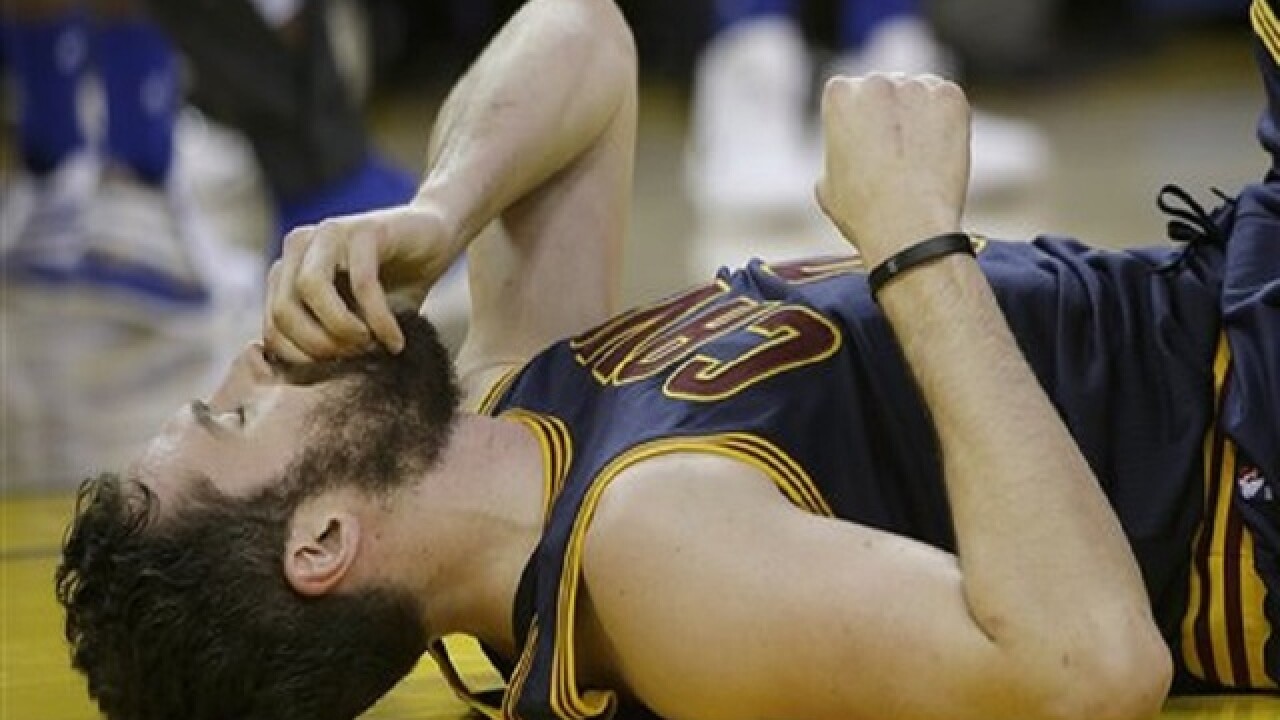 Marcio Jose Sanchez
<p>Cleveland Cavaliers forward Kevin Love remains on the floor after a play during the first half of Game 2 of basketball's NBA Finals between the Golden State Warriors and the Cavaliers in Oakland, Calif., Sunday, June 5, 2016. (AP Photo/Marcio Jose Sanchez)</p>

OAKLAND, Calif. (AP) — Kevin Love lay on the court grabbing the back of his head after taking an elbow from Harrison Barnes.
The Cleveland Cavaliers forward tried to gut it out before pulling himself from the game. But the woozy Love wasn't the only Cavalier who looked to be a daze as the Golden State Warriors may have delivered the knockout blow in the NBA Finals as well.
Love was limited to 20 minutes because of the head injury and the Cavaliers were taken apart in a 110-77 loss on Sunday night to fall behind 2-0 in the best-of-seven series.
LeBron James had 19 points, nine assists, eight rebounds and eight turnovers and the Cavaliers now head back to Cleveland with a mountain to climb. And it's unclear whether Love will be available to help them try.
Barnes hit Love in the back of the head with an inadvertent elbow while going for a rebound in the second quarter. Love was on the ground grabbing the back of his head for several minutes and was examined on the bench during the ensuing timeout.
He returned to the game, finished the first half and started the third quarter before heading back to the locker room. The NBA said he experienced dizziness after playing in the third quarter and has been placed in the leagues Concussion Protocol.
The league said Love and did not immediately exhibit symptoms of a concussion in the first half or at halftime that would have caused him to be removed immediately.
Love missed the final seven games of the 2011-12 season with the Minnesota Timberwolves because of a concussion. Game 3 is not until Wednesday, so the he has two days to be fully evaluated and examined. He finished the game with five points on 2-for-7 shooting in just under 21 minutes.
Kyrie Irving had another poor shooting night for the Cavs. He had 10 points and missed nine of his 14 shots while also getting torched on the defensive end of the floor and is 12 for 36 in the first two games.
Draymond Green led the way for Golden State with 28 points and seven rebounds and Stephen Curry fought foul trouble for most of the game but finished with 18 points and nine assists. Klay Thompson scored 17 points and the Splash Brothers went 8 for 16 on 3-pointers after struggling in their Game 1 victory on Thursday night.
Even with a fully healthy roster this time, the Cavaliers were going to be underdogs in a series against the defending champions who set the single-season record for wins with 73.
But now they're in a 2-0 hole, and the task of delivering the first sports championship to Cleveland in 52 years seems much more daunting.
A team has jumped out to a 2-0 lead in the finals 31 times. That team has gone on to win the title 28 of those times. The Miami Heat were the last team to rally from an 0-2 hole in the Finals when they beat Dallas in 2006.
These aren't the Mavericks, who were a good team with a formidable star in Dirk Nowitzki.
These are the historically good Warriors, with Curry, Thompson, Green and a bench deep enough to hold things down when the stars need a breather.
Coach Tyronn Lue spent the previous two days trying to get his Cavaliers to pick up the pace in hopes that the transition opportunities would create easier shots and increase the ball movement around the perimeter.
It wound up playing right into Golden State's hands, and the Warriors were only too happy to put their foot on the gas. They were careless with the ball, turning it over 21 times, but it didn't matter.
They found each other on the break — for 3s, for layups, for dunks — and had the Cavaliers dumbfounded. Irving, Love and James looked at each other with their hands in the air at times, clearly not on the same page.
Lue tried a little bit of everything to throw the Warriors off. He put James at center to go small, and the Warriors blitzed them 27-16.
He went to Timofey Mozgov to try to get some size in the paint and the Warriors ran circles around him.
It was Cleveland's seventh straight loss to Golden State and now the Cavs head back to Ohio looking to defend their home court. But they also are facing the possibility that there is nothing they can do to stop this Warriors train that is running them over.
Copyright 2016 The Associated Press. All rights reserved. This material may not be published, broadcast, rewritten or redistributed.