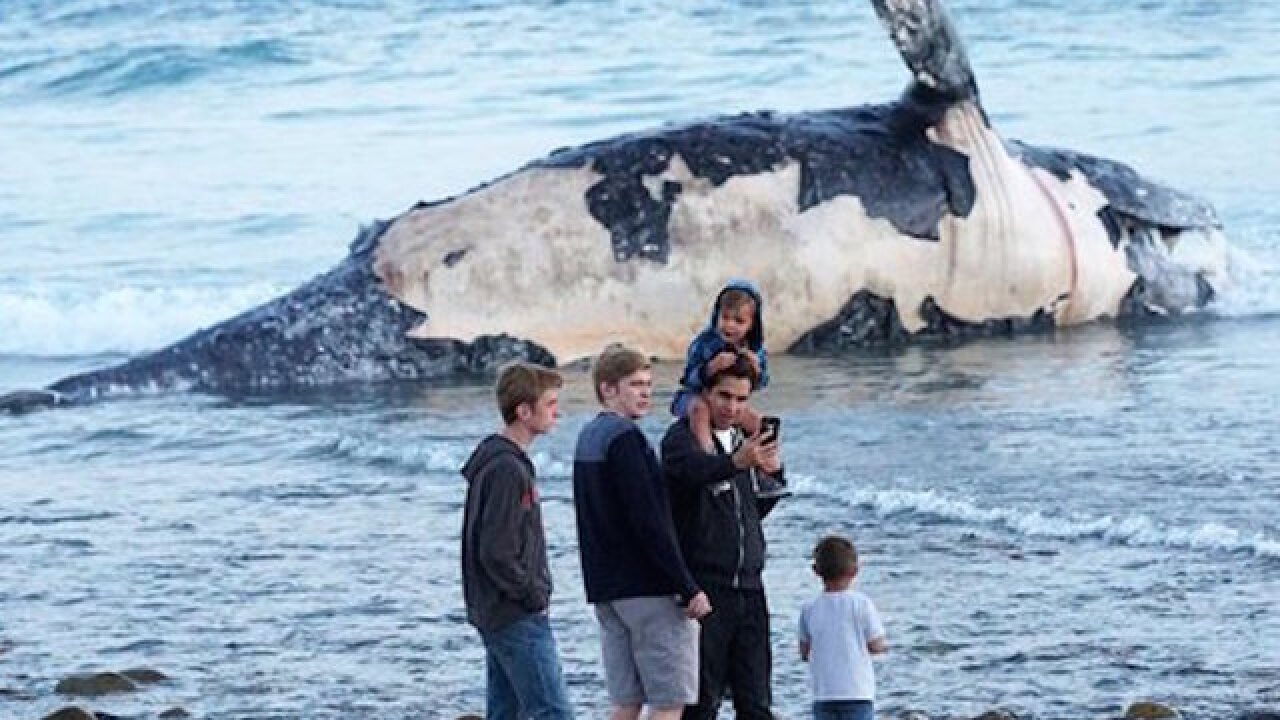 SAN CLEMENTE, Calif. (AP) — The massive, reeking carcass of a whale rotted Tuesday at a popular California surfing spot, luring dozens of gawkers while authorities decided whether to tow it out to sea or cut it into pieces and load them on trucks.

The curious onlookers positioned themselves upwind to avoid the overpowering stench of the decomposing carcass that towered over them as they took selfies and knelt to examine the animal.

Cynthia Stern of Santa Monica drove 75 miles with her friend to place a pink and white orchid by the whale and press homeopathic remedies onto its rotting blubber. The orchid was a gift from her son last Mother's Day and bloomed only a few days ago.

"You should be paying homage to such creatures that are so intelligent and so wonderful," she said. "You could start to feel the positive energy as you walked down the beach. Even though it's a carcass, it's profoundly positive — and anyone who went there is blessed."

The whale was on its side, and its enormous tongue so swollen that it bulged out of its mouth like a giant black balloon. Seaweed still dangled from its mouth and only a few patches of grey-black skin were left on the body, which was a light beige color from the fat underneath.

Removal will be a difficult, messy process whether the carcass is towed out to sea or cut up and hauled away on trucks, said Rich Haydon, superintendent at San Onofre State Beach.

"I don't think the carcass could have landed on a worse stretch of beach," he said, citing its limited access for vehicles and the popularity of the beach known as Lower Trestles south of San Clemente.

Burial on the beach isn't feasible because the stretch is mostly cobblestones, Haydon said.

Heraclio Belmontes of Newport Beach went to see the whale with his two brothers.

Monica Perez brought her three children, ages 7 to 11, to see the unusual sight. They made observations about the texture of the whale's skin and talked about decomposition with their mother as they circled the carcass.

They counted nine footsteps as they measured the whale's tail from end to end where it lay on the sand.

"It's very scientific. It's not every day that you have a whale that washes up onto your beach and there's a lot that we can learn from these majestic creatures," Perez said. "We did miss the end of school but I figure that this is school in action."

The whale likely died of natural causes and was discovered Sunday on the beach. A decision on what to do with the carcass isn't expected for a day or two.

A second whale about the same size was spotted over the weekend floating off shore. That carcass is breaking apart in the water.