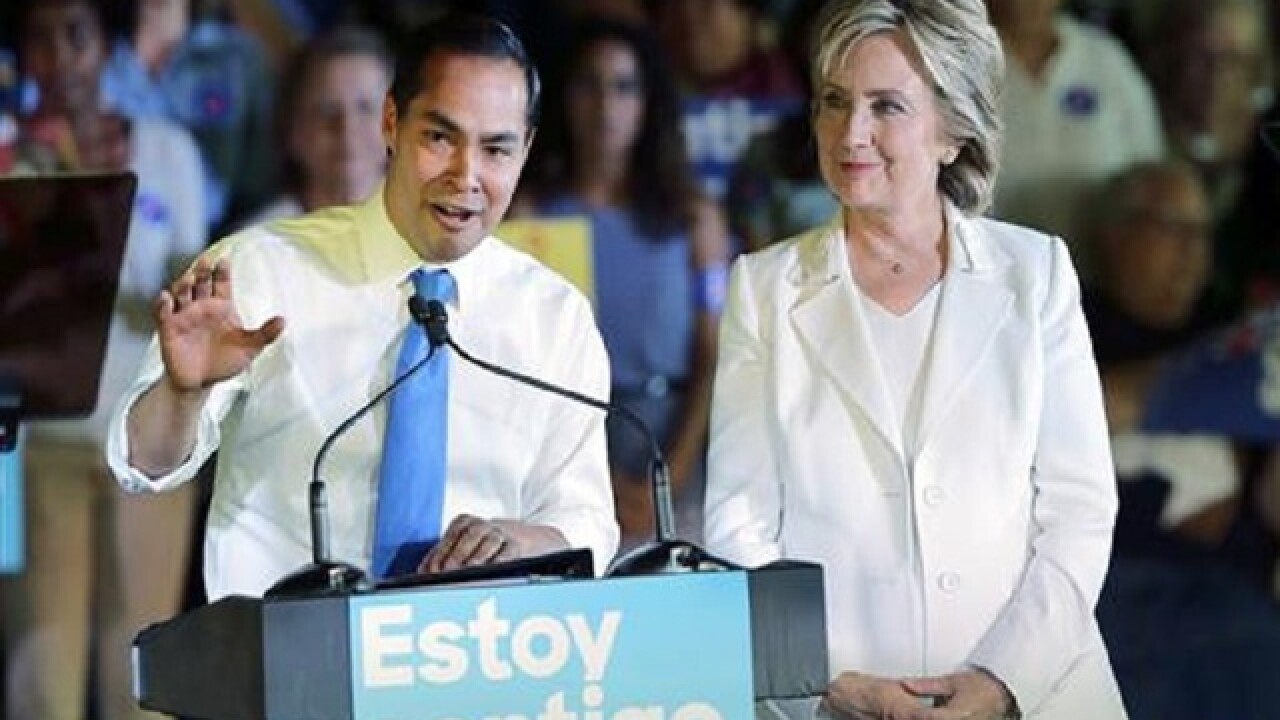 AUSTIN, Texas (AP) — Julian Castro is returning home to San Antonio Friday swarmed by the same speculation as when the 41-year-old left Texas for Washington two years ago: Is he vice-presidential material?
Even as President Barack Obama's housing secretary tries tamping down talk of becoming Hillary Clinton's running mate this fall, Castro is headlining the Texas Democratic Convention under rumors that his name remains on a short list of contenders. But that chatter isn't the only noise.
Castro, who was born in San Antonio but whose grandmother is from Mexico, is one of the most high-profile Hispanic politicians in the country. Some Democrats believe Donald Trump, who has suggested that some Mexican immigrants are rapists and criminals and called a judge's Mexican heritage grounds for moving a trial, will send minority voters flocking to Clinton even if a Latino candidate isn't on the ticket with her.
Other possible picks, including Colorado Gov. John Hickenlooper and U.S. Sen. Tim Kaine of Virginia, could help Clinton carry key swing states. Labor Secretary Thomas Perez also offers Clinton a potential Latino running mate, as well as a liberal who could help unify disheartened Bernie Sanders supporters.
Even some rooting for Castro say Trump's once-unlikely ascension as the presumptive Republican nominee may have changed which contenders make the cut.
"You have to be realistic in the sense that Trump is going to provide a lot of impetus to Hispanics to get out and vote," said Garry Mauro, who is Clinton's state director in Texas and is a former state land commissioner. "If you read the national press the urgency of a Hispanic on the ticket seems to be diminishing."
Castro, who was elected mayor of San Antonio in 2009 at age 35 and held the job for five years, has campaigned for Clinton since the early stages of her White House run. His identical twin brother, Rep. Joaquin Castro, is another up-and-comer among Democrats and railed against Republicans last week over making the Library of Congress continue using the word "alien" in reference to immigrants.
Julian Castro is not even two years into a job that makes him the youngest member of Obama's cabinet and has deflected questions about whether he might join the 68-year-old Clinton on the ticket.
Harvard-educated, telegenic and a charismatic speaker, Castro's political ceiling has long been a subject of speculation, but his fast rise has also begun confronting some pushback. A coalition of progressive groups, some of which have supported Sanders, have criticized Castro since April over his Housing and Urban Development office selling mortgages to Wall Street in the aftermath of the housing and foreclosure crisis.
Some Democrats in Congress and liberal Super PACs, including the Latino Victory Fund, have hit back and criticized progressives of targeting their own.
Even if Clinton doesn't need Castro, Texas Democrats do. Even in Washington, Castro remains the biggest star of a beleaguered state party that hasn't won a statewide office since 1994 and was pummeled again in 2014 when Wendy Davis ran for governor. He will deliver the keynote speech to what is the nation's largest Democratic state convention, where some still hope he may return one day to run for governor.
"He's clearly a star in the party across the country," said Manny Garcia, deputy executive director of the Texas Democratic Party. "He's got an amazing track record right now. We certainly hear all the chatter."
Copyright 2016 The Associated Press. All rights reserved. This material may not be published, broadcast, rewritten or redistributed.