Mexico: Deforestation for avocados much higher than thought 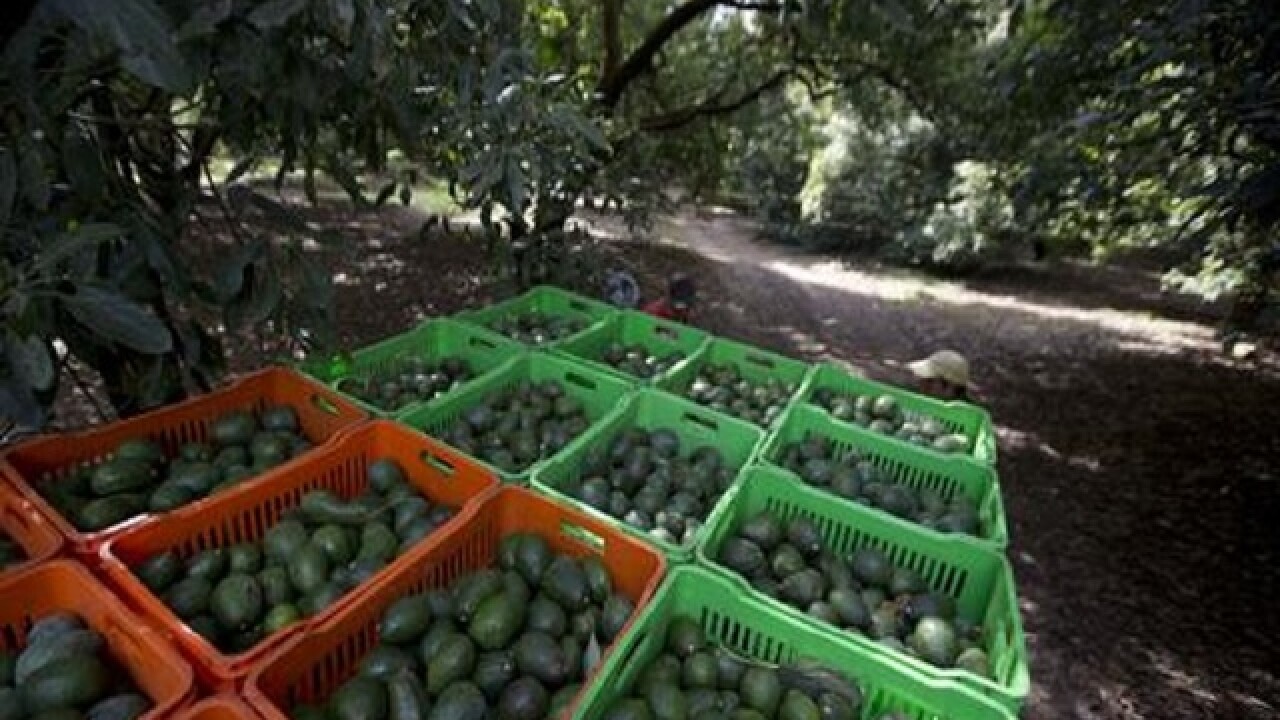 Eduardo Verdugo
<p>FILE - In this Jan. 16, 2014, file photo, avocado boxes are collected an avocado orchard in Michoacan, Mexico. Authorities in Mexico said on Monday, Oct. 31, 2016, that deforestation caused by the expansion of avocado orchards is much higher than previously thought. (AP Photo/Eduardo Verdugo, File)</p>

MEXICO CITY (AP) — Deforestation caused by the expansion of Mexican avocado orchards is much higher than previously thought, authorities said Monday.
Talia Coria, an official in the attorney general's office for environmental protection, said almost 50,000 acres (20,000 hectares) of forest land are converted to agricultural uses each year in the western state of Michoacan, the world's top producer of avocados.
Coria, who heads the office's Michoacan division, said between 30 percent and 40 percent of the annual forest loss is due to avocados. That is about 15,000 to 20,000 acres (6,000 to 8,000 hectares).
Experts say a mature avocado orchard uses almost twice as much water as fairly dense forest, meaning less water reaches Michoacan's legendary crystalline mountain streams on which trees and animals in the forests depend. Species like the monarch butterfly also rely on Michoacan forest as habitat, though Coria said there does not appear to have been damage to the monarch wintering grounds from avocado expansion yet.
Guillermo Haro, the attorney general for environmental protection, said Michoacan grows about eight out of 10 avocados exported worldwide, but added that the state's forests "are a wealth greater than any export of avocados."
Mexico's National Institute for Forestry, Farming and Fisheries Research had previously estimated the loss of forest land to avocado planting at about 1,700 acres (690 hectares) a year from 2000 through 2010. However, the rising popularity of the fruit and higher prices have apparently lured growers to expand orchards faster in recent years.
Avocado trees flourish at about the same altitude and climate as the pine and fir forests in the mountains of Michoacan. The state already has about 370,000 acres (150,000 hectares) of orchards, and no new permits for cutting down forest to create plantations have been granted in recent years.
The largely impoverished state depends on avocado growing and harvesting for jobs and income as an alternative to the rampant production of synthetic drugs that also exists in the state.
"That is why we are sitting down now with all the parties involved to find a way to continue this industry of avocado growing, which provides a lot of Jobs and income for the state, in harmony with the conservation of our natural resources," Coria said.
Coria said authorities began meetings with avocado producers Friday to discuss the problem of deforestation.
"We are going to search for a way .... to ensure that all avocados exported are legal, and that the environment has not been affected by their production," she said. "The avocado growers appear to be convinced that we have to find options for conserving the environment."
However, she said there were no concrete plans yet for any kind of certification of sustainable avocado growing. "It is hard to know which avocado comes from recognized orchards and which comes from illegal plantings," Coria said.
She noted that other agricultural sectors, such as berry and peach farms and cattle ranches, have contributed to deforestation in Michoacan.
Copyright 2016 The Associated Press. All rights reserved. This material may not be published, broadcast, rewritten or redistributed.