US warship diverts to help with quake evacuation 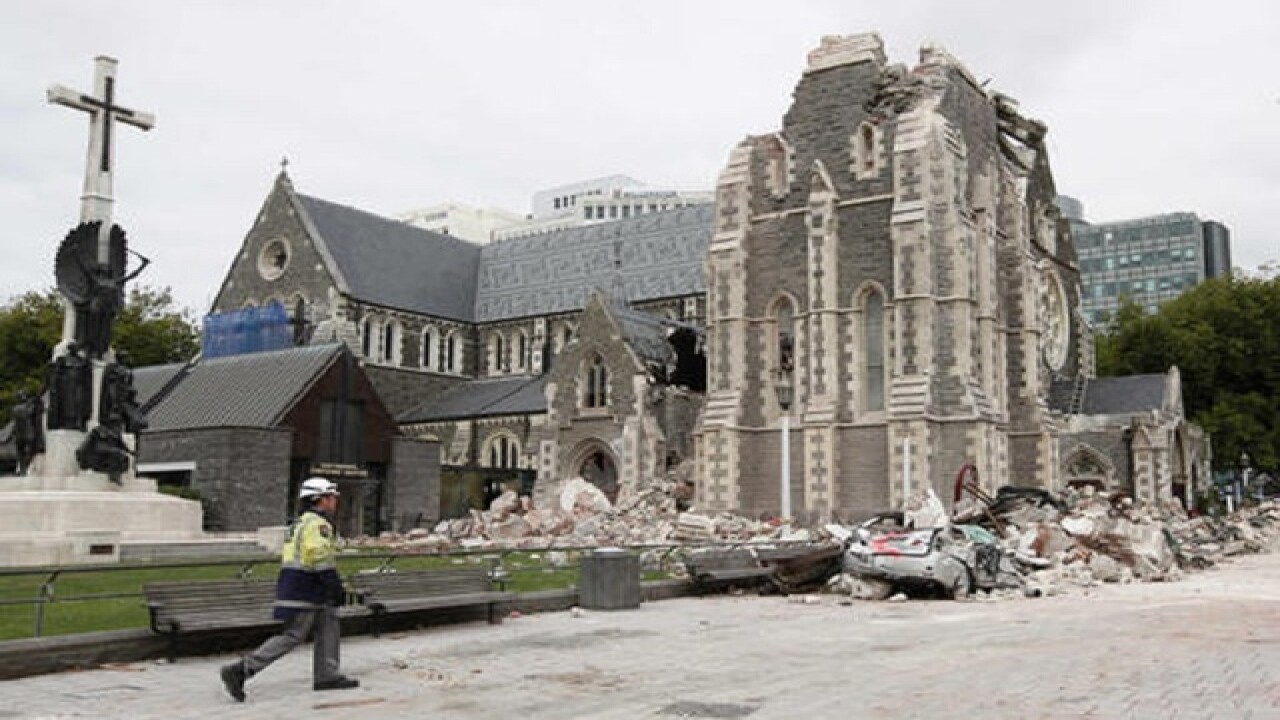 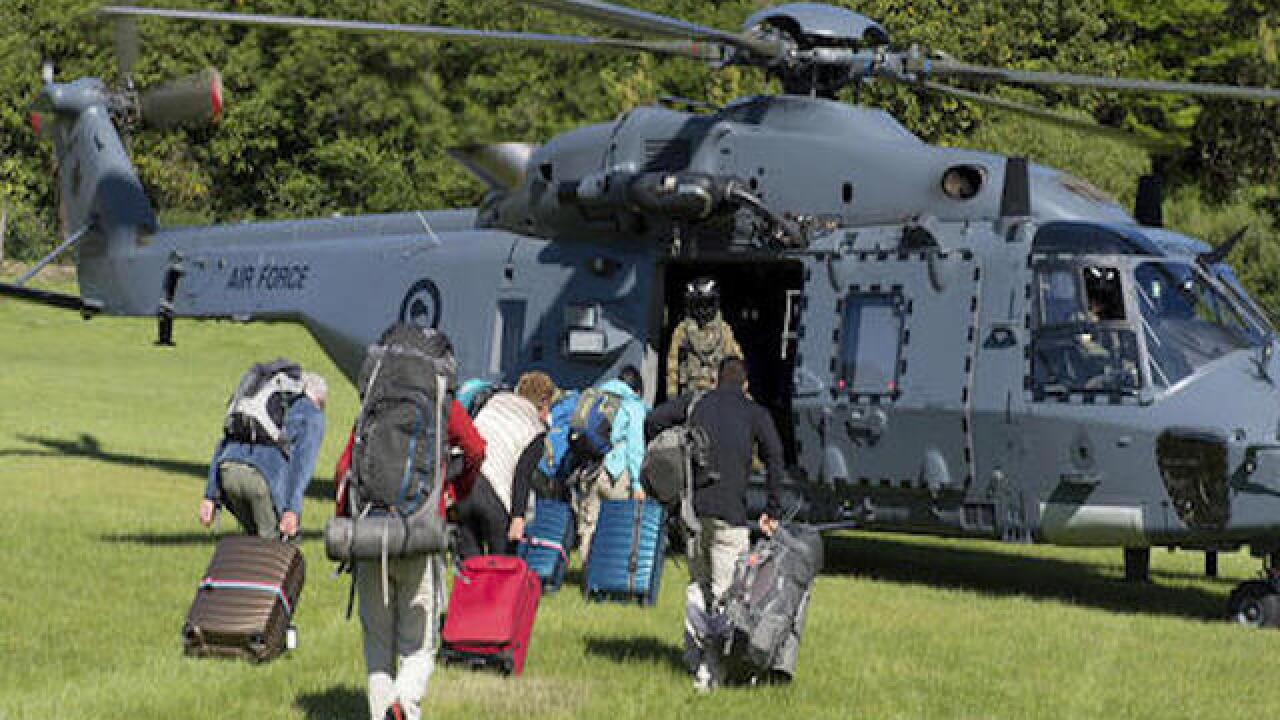 WELLINGTON, New Zealand (AP) — The first U.S. warship to visit New Zealand in more than 30 years is changing course to help evacuate people isolated by an earthquake in the coastal township of Kaikoura.

The USS Sampson had been due to sail into Auckland on Wednesday as part of 75th anniversary celebrations for the New Zealand navy.

The visit is significant because it ends a 30-year military stalemate between the countries that was triggered when New Zealand banned nuclear warships.

Brownlee says despite the change in plans, it is "poignant" to see the anniversary marked with cooperation and camaraderie.

New Zealand military officials say they've evacuated about 140 stranded tourists and residents from the coastal township of Kaikoura and expect that number to rise to 200 by the end of the day.

They say two babies were among those rescued Tuesday.

The military is using four NH90 helicopters to rescue those stranded by Monday's powerful earthquake and to deliver supplies.

The magnitude-7.8 quake cut off train and vehicle access to the town, which is a popular destination for travelers taking part in whale-watching expeditions.

Air Force Wing Commander Scott McKenzie said in a statement that military personnel were delivering food, water, diesel fuel and other basic necessities. Authorities have prepared about 5 metric tons (5.5 tons) of supplies in the city of Christchurch.

The operation comes as several buildings in the capital, Wellington, were evacuated Tuesday and streets cordoned off after engineers determined a nine-story building was in danger of collapsing.
The quake that struck the South Island early Monday left two people dead and triggered a small tsunami. It also brought down rocks and mud that swept across highways and cracked apart roads.
The defense force said it had started ferrying people out by military helicopter and that a navy ship from Auckland was due to arrive in the area Wednesday morning.
Home to about 2,000 residents, Kaikoura is a popular destination for travelers taking part in whale-watching expeditions or wanting a stopover with mountain views. But the quake knocked out water supplies and sewer systems and left people with no easy way out.
"From all directions, Kaikoura has essentially been isolated," Air Commodore Darryn Webb, acting commander of New Zealand's Joint Forces, told The Associated Press. "There's a real imperative to support the town because it can't support itself."
Webb said the military was using four NH90 helicopters that could each transport about 18 people at a time out of the town. He said the ship could pick up hundreds of people if weather conditions allowed.
"We're going to get as many people and belongings out as quickly as we can," Webb said.
He said the operation could take several days and that if needed, a C-130 military transport plane could drop fuel, water, food and other supplies to the town. He said about five metric tons of supplies were ready to be delivered from Christchurch.
Sarah Stuart-Black, director of the Ministry of Civil Defence and Emergency Management, said the priority was transporting out those people with health issues or international flights booked. She said 34 people had been airlifted out by noon Tuesday.
She said the community was rallying to help the tourists.
"It's fantastic that some of the locals in Kaikoura have taken in tourists into their own homes," she said.
In Wellington, Brendan Nally, the regional commander for the New Zealand Fire Service, said engineers were completing an inspection of the nine-story downtown office building when they found that a major vertical beam had failed above the fifth floor.
"It looks somewhat like a broken bone in the leg. It's fractured through," Nally said. "So the building is at significant risk of collapse."
Nally said the building was empty when the quake struck because it was being renovated.
He said the buildings evacuated included the Thai Embassy, the headquarters for New Zealand Rugby, the Anglican cathedral and the national headquarters for the Red Cross.
Elsewhere in the capital, many returned to work after the quake shut down much of the central city on Monday. But some buildings remained closed and heavy rain and flooding compounded the difficulties for others.
And strong aftershocks continued to shake New Zealand, rattling the nerves of exhausted residents.
Police said one person died in Kaikoura and another in Mt. Lyford, a nearby ski resort. Several other people suffered minor injuries in Kaikoura, police spokeswoman Rachel Purdom said.
Prime Minister John Key flew over Kaikoura by helicopter Monday as aftershocks kicked up dust from the landslides below. Cars could be seen lying on their sides and parts of the road were clearly impassable.
"It's just utter devastation," Key said.
Three cows whose predicament captured the interest of people around the world after they became stranded on a small island of grass in an area ripped apart by the quake were rescued. The Newshub news service reported a farmer and some helpers dug a track to them and brought them out.
New Zealand, with a population of 4.7 million, sits on the "Ring of Fire," an arc of seismic faults around the Pacific Ocean where earthquakes are common. An earthquake in Christchurch five years ago destroyed thousands of homes and buildings and killed 185 people.
Copyright 2016 The Associated Press. All rights reserved. This material may not be published, broadcast, rewritten or redistributed.