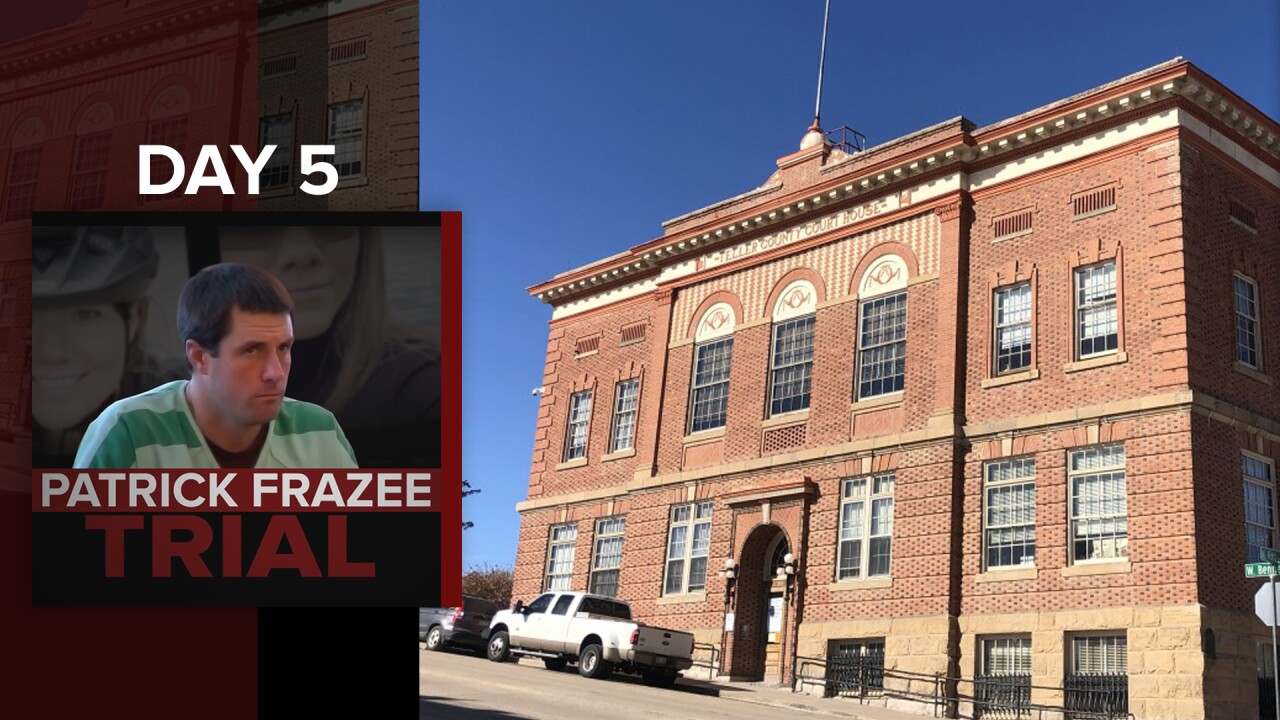 CRIPPLE CREEK, Colo. — Prosecutors' star witness in the Patrick Frazee murder trial returned to the witness stand Thursday morning in Teller County court to continue her testimony of how Frazee asked her to help him kill his fiancee, and how he made her clean up the murder scene afterward.

She said Thursday that Frazee’s and Kelsey Berreth’s 1-year-old daughter was present for her mother’s murder and prosecutors walked her back through her December 2018 tours with investigators of Berreth's home and the Frazee and Nash ranches.

Frazee, 33, of Florissant, is accused of murdering Berreth, his 29-year-old fiancée, on Thanksgiving Day 2018 in Woodland Park. He is also accused of soliciting Krystal Lee Kenney, an Idaho resident whom he had dated, to help him carry out the murder.

He faces eight charges, including first-degree murder, tampering with a deceased body and solicitation. While he pleaded not guilty to the charges, Kenney took a plea deal, pleading guilty to a tampering charge and agreeing to testify at Frazee's trial.

READ MORE: Timeline of events leading up to, after Kelsey Berreth's death

The prosecution picked up where they left off on Wednesday morning, and the defense is expected to cross-examine Kenney later Thursday.

On Wednesday, Kenney took the stand and outlined her version of the alleged plot to kill Berreth, when and how Frazee allegedly committed the murder, how she says she was forced by Frazee to clean up the gruesome scene, and what happens in the weeks after the cleanup that led FBI and Colorado Bureau of Investigation agents to her home in Idaho.

Prosecutors picked up with questioning of Kenney on Thursday morning at 10:30 a.m. Court was to start earlier in the day, but Frazee was sick to start the day and Kenney wasn’t feeling well either. Frazee took medicine and was feeling better, the judge said.

Frazee wore a collared button-down shirt and khakis on Thursday, while Kenney wore a sweater and skirt. Judge Scott sells said that he received information that some members of the public were trying to record portions of the trial, so he modified the decorum order to require members of the public to turn their phone off entirely, lest there be “a severe consequence.” The media decorum rules remain the same.

Prosecutor Jennifer Viehman was the first to question Kenney on Thursday. She asked Kenney to back up to Dec. 17, when she was visited by the FBI and CBI at her home in Idaho, the subsequent statement she provided to authorities in Colorado on Dec. 20, and the tour of Nash Ranch, the Frazee ranch and Berreth’s home on Dec. 21.

Kenney said it was not easy to provide the statement but said she wanted to because she couldn’t live with what she knew. She further said in court Thursday that it was hard to discuss the testimony in court.

Viehman pulled up several photo exhibits of items used during the plot and of some of the scenes of the crime, including Frazee’s truck and Berreth’s townhome and vehicles.

She said that after bagging up six bags of trash and items during the cleanup at Berreth’s home, she placed them to the left of Berreth’s sedan. Kenney was also shown photos of the inside of Berreth’s home and described the blood that was spattered across various parts of the interior.

Further photos showed the locations where she found the trash bags, where she got the cleaning supplies and other items inside the apartment.

Viehman asked Kenney about where Berreth and Frazee’s daughter, Kaylee, was when Frazee allegedly killed Berreth. She said he told her that the baby was in her jumper in the back room when he hit Berreth in the head with a baseball bat. Kenney wept as she recounted that conversation and as she was shown photos of Kaylee in the jumper and some of the other items from the home.

She testified that wipe marks on sofa cushions and other items were caused by the bleach and Windex she used to clean the apartment. She pointed out that she is in one of the photos, along with law enforcement officers, and was pointing out where she found a tooth during the Dec. 21 tour. Kenney told Viehman that the photos show how she left the townhome after cleaning and not how she initially saw it.

As Viehman continued to walk her through the photos, she pointed out the places she purposely left blood spatter in the hopes that investigators might find it, including on the back of a cedar chest near the fireplace and on both the rock face and wood paneling of the fireplace.

Kenney said, as she did Wednesday, that it took her about four hours to clean the inside of Berreth’s townhome. She said, again, she parked in the alley, grabbed the bags from near Berreth’s car, put them in her car and left. She reiterated that she went to Sonic and then to the Frazee Ranch afterward.

She told the court she believes she was at Frazee’s ranch for about three or four hours after cleaning before she went back to Berreth’s townhome to send the text from Berreth’s phone to her mother. She reiterated the timeline of events she discussed Wednesday about how she and Frazee then went to a Florissant gas station and then drove to Nash Ranch to get the black tote that contained the bat allegedly used to kill Berreth and possibly her body.

The tours of Frazee and Nash ranches

Kenney said that on the same day she went on the tour of Berreth’s home with authorities, she also took police to Frazee’s ranch in Florissant as well as Nash Ranch.

Prosecutor Viehman submitted a video from a body camera to show the court.

In the video, Krystal was seen talking with police, including CBI Agent Gregg Slater. Police were seen looking at the house and the barn. A law enforcement officer, possibly Slater, could be heard saying he thought the time was about 8:30 a.m.

Kenney was wearing a black jacket and black sunglasses in the video. Her hair was in a ponytail.

Frazee watched the video with interest from his seat in the courtroom. Kenney stared down and didn’t watch.

In the video, Slater asked Kenney to describe the black tote, which she did, including details about the clasps and hinged lid. When asked where Frazee allegedly burned it, she said it was in a round aluminum water trough without a bottom.

She pointed out where she had first parked when she got to Frazee’s ranch on Nov. 24, noting that she got out and talked with Frazee for 60 to 90 minutes. He told her he needed to do chores and tend to Kaylee.

In the video, Kenney told Slater that Frazee had given her Berreth’s phone before she drove to Woodland Park, then back to a Conoco in Florissant. She further described how she and Frazee drove between Nash Ranch, Woodland Park and the Frazee ranch.

They then started to walk toward where Kenney had parked that day and she pointed out the burn pit area.

When asked if the discolored dirt has changed since she last saw it, Kenney said she didn’t see a major difference. She pointed out a nearby container and said it was identical to the black tote Berreth’s body was allegedly burned in. Kenney also showed Slater where the trough had been. She said she knew it came from somewhere on his property.

She said she brought the trash bags from Berreth’s home, containing items that were bloodied, to add to the fire. There were two white garbage bags and four black ones, she said. Kenney said she was present when Frazee first started the fire. In the video, she was seen showing authorities where Frazee got the wood from.

There was a brief break when the video was paused because the judge had heard a report that somebody was drawing a sketch in the courtroom. Adam Stiegerwald, one of Frazee’s attorneys, identified a man who was called up to the stand and said he was drawing and taking notes. The judge had denied a sketch artist for the trial on Oct. 31. Deputies were directed by the judge to rip out the sketches and they did so, removing multiple pieces of paper from the notebook. The judge warned if it happened again, he’d be held in contempt of court, with a sentence that could land him six months in jail.

More deputies were brought into the courtroom to watch over those in attendance.

Around 11:45 a.m., they resumed playing the body camera footage.

In addition to the wood, Kenney said Frazee also had gas and motor oil ready. Kenney took authorities to where Frazee had them sitting out that day. Kenney said she only saw one red gas can.

Kenney said Frazee put green tin roof pieces on top of the fire. She showed authorities where those tin pieces were located, though they were different sizes than she remembered.

At one point, Slater could be heard on the video saying that Kenney mentioned Sheila Frazee, Patrick Frazee’s mother, came outside to look at the fire from the deck.

Kenney said Frazee poured gasoline into a “mineral bucket” and tossed that on the fire as well. Frazee put the entire black tote into the fire, she said. She left after that, so she didn’t see it burn, she said.

After Kenney said Frazee used a single match to light the trough’s contents on fire, the video ended.

Viehman then introduced a second video.

This follow-up video showed Slater talking with Kenney. She described everything she took from Berreth’s home during the cleanup and detailed what she was wearing at the time. She put it all in trash bags, she said. She had been wearing a white jump suit that day, she said, with a gray sweater underneath and a black pair of leggings. Kenney said she put her socks, underwear and bra, and hairnet and shoe covers into the trash bags as well.

She said the following items were also in the trash bags:
· Two big stuffed animals (including a white horse)
· Wooden building blocks
· Books, including Berreth’s Bible or some other religious-looking book
· Plastic cookie cutters
In the video from 9 a.m. on Dec. 21, Slater asked Kenney if she remembered if any items survived the fire that she took from Berreth’s home, and Kenney said she didn’t know what was in some of the Hobby Lobby bags she took from the home. They also discussed what cleaning supplies Kenney used.

Viehman noted that Kenney pointed out in the video specific areas where things were taken and moved.

The state then brought in a black tote, which Kenney said looked exactly like the tote from Frazee’s property. The state also brought in a cardboard box. Inside, Kenney said, appeared to be the gas can seen in the video which Frazee allegedly used to light the fire.

Amid tears, Kenney said it’s the faded, red gas can she saw.

The court broke for lunch just after noon and was set to be back from recess at 1 p.m.

READ MORE: All Denver7 coverage on the killing of Kelsey Berreth, trial of Patrick Frazee

Prosecutors decided in July to not file a motion in pursuit of capital punishment, meaning Frazee will not face the death penalty in this case if he is found guilty.

Live tweeting and live reporting is not allowed in the courtroom, per a court decorum. The trial is expected to last three weeks.

This story was originally published by Stephanie Butzer, Blair Miller and Sam Kraemer at KMGH and KOAA.