Goodell on Kaepernick: 'I don't necessarily agree with what he is doing' 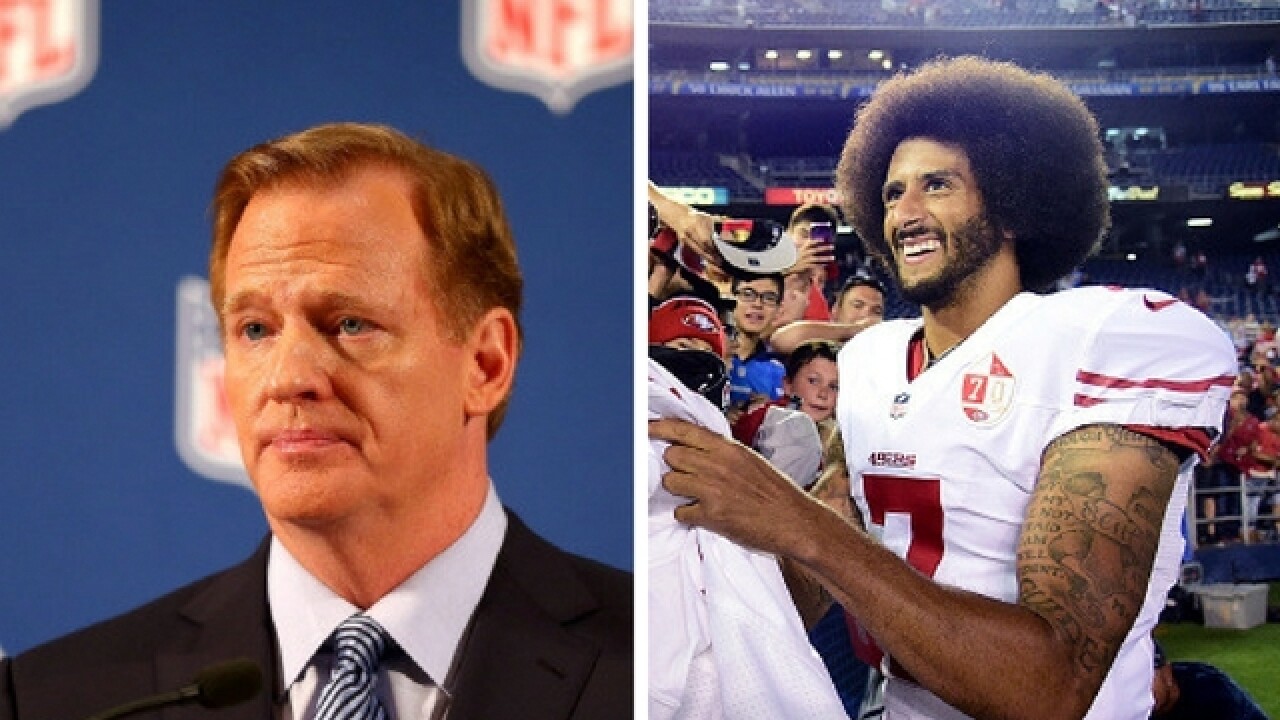 Asked by The Associated Press about Kaepernick's decision not to stand before games when the national anthem is played, Goodell said in an email Wednesday: "I don't necessarily agree with what he is doing."

Goodell added that NFL players having a visible platform for their viewpoints. With that comes responsibility to use those platforms properly.

"We have to choose respectful ways of doing that so that we can achieve the outcomes we ultimately want and do it with the values and ideals that make our country great," said Goodell, whose late father, Charles, was a U.S. senator.

"I think it's important to have respect for our country, for our flag, for the people who make our country better; for law enforcement; and for our military who are out fighting for our freedoms and our ideals."

The San Francisco 49ers quarterback wouldn't stand for the anthem at the team's preseason games, with teammate Eric Reid and Seattle's Jeremy Lane doing the same. Kaepernick has cited racial injustice and police brutality among the many reasons for his actions and said he plans to continue to not stand for the anthem during the regular season.

Kaepernick said Wednesday on his Instagram account that he will donate all the money he receives from his jersey sales to charity to thank fans for their support. He said he's pleased his 49ers jersey has become the top seller in the NFL since his protest became public.

The 49ers open their season at home against the Los Angeles Rams on Monday night.

Also in reaction to Kaepernick's actions:

— U.S. hockey coach John Tortorella said he'd bench any player who stays seated during the national anthem. Tortorella, who will coach the United States at the upcoming World Cup of Hockey, told ESPN : "If any of my players sit on the bench for the national anthem, they will sit there the rest of the game."

"The only thing I would love for everyone to really think about is: What does the American flag mean to them? When I look at the American flag, I see a bunch of fights — how much we have overcome," Marshall said.

Marshall said he'd stand for the national anthem this weekend, but he didn't criticize Kaepernick's actions.

— Seahawks receiver Doug Baldwin said he has considered joining Lane in not standing for the anthem.

"I want to make sure I get all my ducks in a row before I do so," Baldwin said.

"My grandfather being in the military it hit home for me as well. It's the veterans that have reached out and said that's what they fought for, that's what they sacrificed their lives for was to give people back home under the flag, under this country, the opportunity to stand up or sit for what they believe in. So that was very heartening for me to hear that.""

Teammate Bobby Wagner believes the Seahawks should act together because "that's that the world needs to see."

"Anything we want to do, it's not going to be individual," he added. "It's going to be a team thing. The world needs to see people coming together versus being individuals."