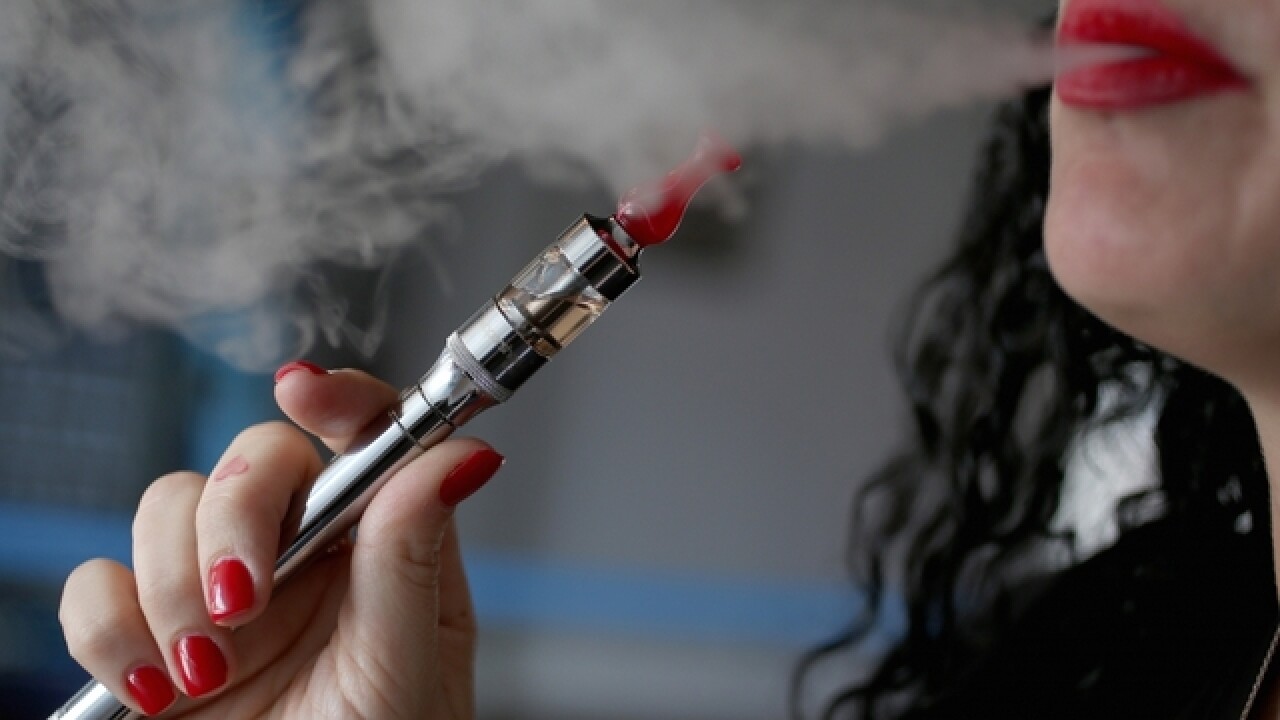 CHICAGO (AP) — Electronic cigarettes have sickened rising numbers of young children, a study of U.S. poison center calls has found. Most cases involve swallowing liquid nicotine.
While most kids weren't seriously harmed, one child died and several had severe complications including comas and seizures.
"This is an epidemic by any definition," said lead author Dr. Gary Smith, director of the Center for Injury Research and Policy at Nationwide Children's Hospital in Columbus, Ohio.
The researchers say the results highlight a need for better parent awareness about the importance of keeping the devices out of sight and reach of young kids. They also recommend stricter regulation and applauded long-awaited restrictions the U.S. Food and Drug Administration issued last Thursday.
The study examined poison center calls about exposure to nicotine and tobacco products among children under age 6 from January 2012 through April 2015. The most worrisome findings involved e-cigarettes — battery-powered devices that turn nicotine into an inhalable vapor. Some feature colorful packaging and flavored nicotine that can attract young children.
The results were published Monday in the journal Pediatrics .
THE NUMBERS
Monthly calls about young kids' swallowing, inhaling or touching e-cigarettes climbed from 14 early on to 223 by the study's end. Calls totaled 4,128 during the study. Most children were age 2 or younger.
The cases represent 14 percent of the nearly 30,000 calls about kids' exposure to nicotine and tobacco products during that time.
THE HARM
Liquid nicotine in e-cigarettes can harm young children if swallowed or absorbed into the skin. Vomiting, a quickened heartbeat and jittery behavior are among the symptoms. The American Academy of Pediatrics recommends calling poison centers if exposure is suspected.
Most exposures to e-cigarettes were managed at home. Among those who received medical care, less than 3 percent were hospitalized. About 2 percent, or 77 kids, had severe complications including seizures, coma or breathing problems.
Most affected children had symptoms lasting two hours or less.
COMMENTS
Dr. Joan Shook, chief safety officer at Texas Children's Hospital in Houston and head of the American Academy of Pediatrics' emergency medicine committee, called the poisonings "a huge public health issue."
"Many emergency physicians are going, 'What the heck, this is really a problem, why aren't they doing anything about it?'" she said.
"If you use these products, you need to treat them as medication or toxins and keep them closed, locked and out of reach of children," said Shook, who wasn't involved in the study.
Gregory Conley, president of the American Vaping Association, noted that more recent data from the American Association of Poison Control Centers indicate that exposures to liquid nicotine may be on the decline. However, the most recent numbers don't indicate whether the decrease includes young children. He said most vaping liquid products use child-resistant packaging.
NEW RESTRICTIONS
The FDA rules issued last week will require federal review of the devices and their ingredients, imposing restrictions similar to those affecting traditional cigarettes. The agency intends to issue rules to require nicotine exposure warnings and child-resistant packaging. That action would supplement the Child Nicotine Poisoning Prevention law, which takes effect this summer and will require child-resistant packaging of liquid nicotine containers.
Associated Press 2016