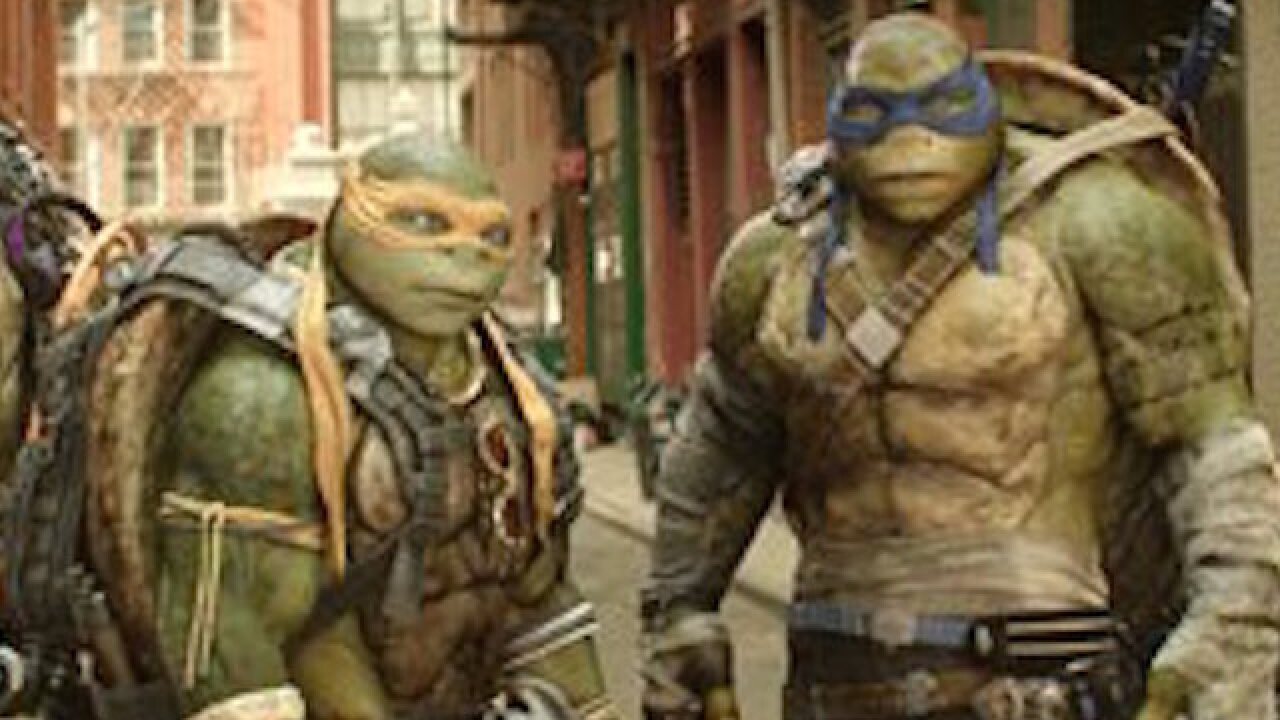 Lula Carvalho
<p>This image released by Paramount Pictures shows, from left, Donatello, Michelangelo, Leonardo and Raphael in a scene from "Teenage Mutant Ninja Turtles: Out of the Shadows." The movie opened to $35.3 million according to comScore estimates Sunday, June 5, 2016, close to half of what the first film opened to in 2014. (Lula Carvalho/Paramount Pictures via AP)</p>

LOS ANGELES (AP) — Turtle power isn't all that strong the second time around, according to comScore estimates Sunday, but not all is bleak at the box office. While many of the season's sequels continue to struggle, the healthy debut of the romantic drama "Me Before You" proved that there is room for more than superheroes in the summer.

"Teenage Mutant Ninja Turtles: Out of the Shadows" won the box office, but its estimated $35.3 million debut is not exactly cause for a celebratory pizza party. The $135 million production from Paramount Pictures and Nickelodeon Movies comes just two years after the studios rebooted the property. The 2014 movie performed surprisingly well — opening to $65.6 million and going on to gross $493.3 million worldwide — despite lackluster reviews.

While lower in turnout, those who did show up liked this film far better than the first, according to exit polls. "Out of the Shadows" doubles down on the fan elements with the introduction of a number of villains from the '80s cartoon. But it was a bit too late for some who turned out for the first. The studio noticed a drop in attendance from the "nostalgia" audience of 25 to 34-year-olds this time around.

"You have to work a little bit harder to get people to a property if they didn't feel that we hit the fan beats as hard on the last movie as this movie does," said Megan Colligan, Paramount's President of Worldwide Distribution and Marketing. Colligan is hopeful that word of mouth will play a part in getting the audiences they lost back to the theater.

"Teenage Mutant Ninja Turtles 2" is just the latest in a string of underwhelming openings for sequels this summer, including "Neighbors 2: Sorority Rising," ''Alice Through the Looking Glass," and even "X-Men: Apocalypse," which fell a hefty 66 percent in its second weekend in theaters, earning $22.3 million for a second-place finish.

"When we've had this many sequels in a row not performing well in an industry where sequels are king, that's disconcerting," said Paul Dergarabedian, comScore's Senior Media Analyst. "What people want is good movies. If they truly deliver, I don't think there's a stigma against sequels."

In a marketplace saturated with sequels, the romantic tearjerker "Me Before You" stood out from the pack and performed quite well because of it, earning $18.3 million for a third-place finish. The film, based on Jojo Moyes' bestselling novel, has gotten mixed reviews from critics, but audiences, who were 81 percent female and 53 percent over the age of 35 gave the film a solid A CinemaScore.

Warner Bros. distributed the film, a co-production between MGM and New Line Cinema which cost a reported $20 million to produce.

"We looked at a busy marketplace and said 'where is there a movie for older females and younger females? Let's put it right against the more male-driven, superhero, four quadrant movies. Zero in on the female demographic,'" said Jeff Goldstein, executive vice president of Domestic Distribution for Warner Bros. "We were hoping to do somewhere between $13 and $15 million. It's a big win for us."

"We wish that it was grossing more, but our critical response is really good on the film and we have been able to reach our core male audience," said Nick Carpou, Universal's President of Domestic Distribution.

While things have slowed down at the box office since the summer kicked off so strongly with "Captain America: Civil War," the year is still up some 5 percent. Dergarabedian thinks that things will get back on track soon, especially with more promising sequels like "The Conjuring 2," ''Finding Dory," and "Jason Bourne" on the horizon.

"We can't blame it all on sequel-itis," Dergarabedian said. "I don't think anyone cares what the title is, what number the movie is, as long as the movie really delivers."