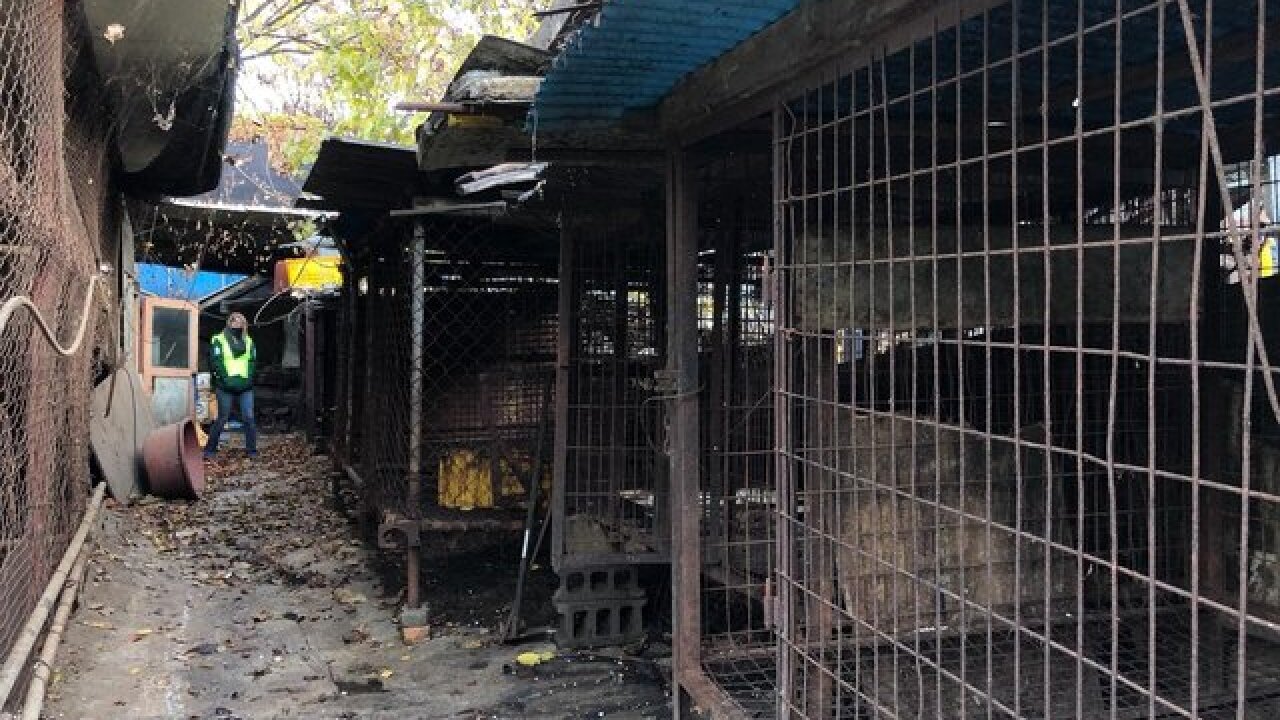 Copyright 2018 Scripps Media, Inc. All rights reserved. This material may not be published, broadcast, rewritten, or redistributed.
Michael Bernard/HSI
<p>Taepyeong, the largest dog slaughterhouse in South Korea, has been shut down by local authorities in a move hailed by animal campaigners as a landmark moment in the demise of the country's brutal dog meat trade.</p>

South Korea has shut down its largest dog slaughterhouse in a move hailed by animal rights campaigners as a major blow against the country's canine meat trade.

Seongnam City council, Gyeonggi province, closed Taepyeong where hundreds of thousands of dogs were killed each year by electrocution before their remains were sold for meat, according to Humane Society International (HSI).

"We have been making constant efforts to shut down the Taepyeong-dong dog slaughterhouse through investigations and putting pressure on Gyeonggi province and Seongnam-si," said Hyunji Kim of Korea Animal Rights Advocates.

South Korea is the only country in Asia where dogs are routinely and intensively farmed for human consumption. There are conflicting figures on the number of farmed dogs, slaughterhouses and markets across the country, but the HSI estimates around two million dogs are being kept in around 17,000 facilities.

Taepyeong comprises six individual slaughterhouses, five of which will be bulldozed immediately. Permission to destroy the sixth building was not secured in time for the closure, but all its cages will be destroyed and equipment removed so that it is no longer operational, HSI said in a statement.

Built illegally, the decision to shut down the slaughterhouse was made in 2013 by the city council, which consulted with the abattoir, animal activist groups and local residents over its closure.

The council intends to build a community park on the land, the HSI statement said.

Activists reported seeing horrifying scenes at the slaughterhouse, including a pile of dead dogs abandoned on the floor, electrocution equipment, knives, and a de-hairing machine.

"I shudder to think how many millions of beautiful dogs will have met their horrific fate at this place over the years," Nara Kim, an HSI activist said. "It was a stain on the city of Seongnam and we are so pleased to see it bulldozed."

In addition to the slaughterhouses, the last remaining "bricks & mortar" vendor selling live dogs at Moran Market will also be closed.

Moran was once the largest dog meat market in South Korea, according to HSI, but recently the number of dog meat shops has decreased due to efforts by local authorities.

The closure of Taepyeong comes at a time when dog meat consumption is declining in South Korea, particularly among younger people.

A survey by Gallup Korea conducted in June 2018 shows that 70 percent of South Koreans say they will not eat dog meat in future, and a series of recent moves to curb the dog meat trade reflects a society increasingly ill at ease with the industry.

In April this year, a district court in Bucheon fined a farmer for unlawful animal slaughter, ruling that meat consumption was not a legal justification to kill dogs.

In August, Seoul City announced there will be no more dog slaughterhouses at Kyungdong Market in Dongdaemun from next year.

In the same month, operators of an illegal dog slaughterhouse were prosecuted for water pollution, and President Moon Jae-In's office pledged to consider removing dogs and cats from the legal definition of livestock.

Saying the government needed to consult before making a decision, a presidential secretary for agriculture and fishery, Choi Jae-kwan, quoted an independent 2018 survey which estimated that 51.5% of South Koreans are against the idea of banning dog meat while 39.7% think it should be banned.