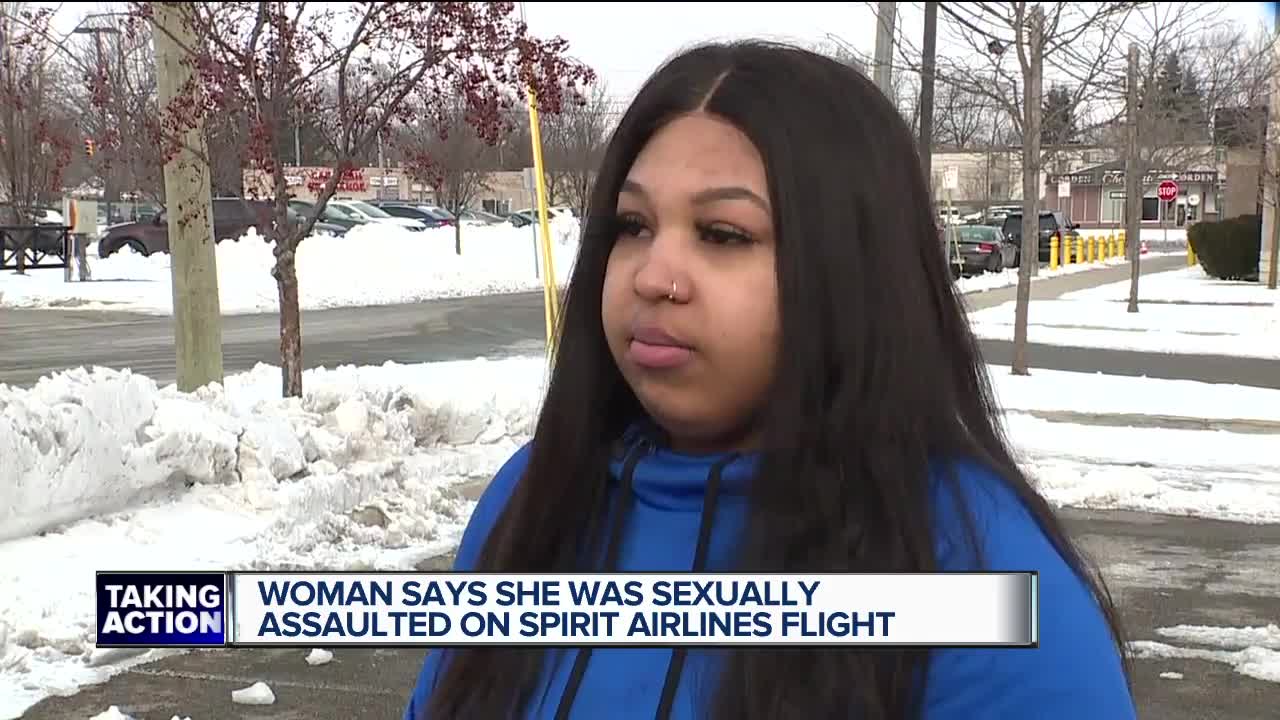 (WXYZ) — Twenty-two-year-old Tia Jackson said her experience on a flight from Atlanta to Detroit on Tuesday makes her not want to fly again.

She was sitting in between a friend and a male passenger when she fell asleep and was awoken by something alarming; she claims the man next to her put his hands down her pants.

"He just went in my pants from the side," she told 7 Action News.

Jackson said the man also appeared to be touching himself, and had his jacket over his lap. When she reported the alleged behavior to flight staff, she said they did little to help her.

“Spirit basically allowed it to happen. Like, you basically let him get away with it.”

"He just went in my pants from the side." A metro Detroit woman says she was inappropriately touched by a male passenger on a recent from Atlanta to @DTWeetin. Why she's now pointing the finger at @SpiritAirlines, tonight on @wxyzdetroit at 5. pic.twitter.com/UcstGZICY3

Jackson thinks staff should have immediately made the male passenger move.

We take this claim seriously and are in direct contact with the guest. We thank our crew for their quick and professional assistance to address the situation.

Our flight attendants on board that flight learned of the alleged incident 18 minutes prior to landing when the guest pressed the call button and received immediate attention. Once she told the flight attendant who came to her seat, the flight attendant directed her to a different seat. The cabin crew wanted to move her, as opposed to him, because the move would have left him with an empty seat on one side and an aisle on the other.

By the time the guest declined to move, landing was imminent and everyone had to be seated as required by federal regulation. Law enforcement began its investigation immediately after the flight arrived.

We are supporting law enforcement as they investigate. Questions about that investigation should be directed to them.

A spokesperson for the FBI in Detroit confirmed they are aware of the incident and currently looking into it. No arrests have been made.

“That man should have never walked off the plane, matter of fact, nobody on the plane should have even left until the police got there," Jackson told 7 Action News.

This isn't the first time a metro Detroit woman has pointed to the airline for allegedly mishandling a situation. In March 2019, a woman sued Spirit for removing her 15-year-old from a flight without her consent.

Jackson said she plans to take legal action against the airline.