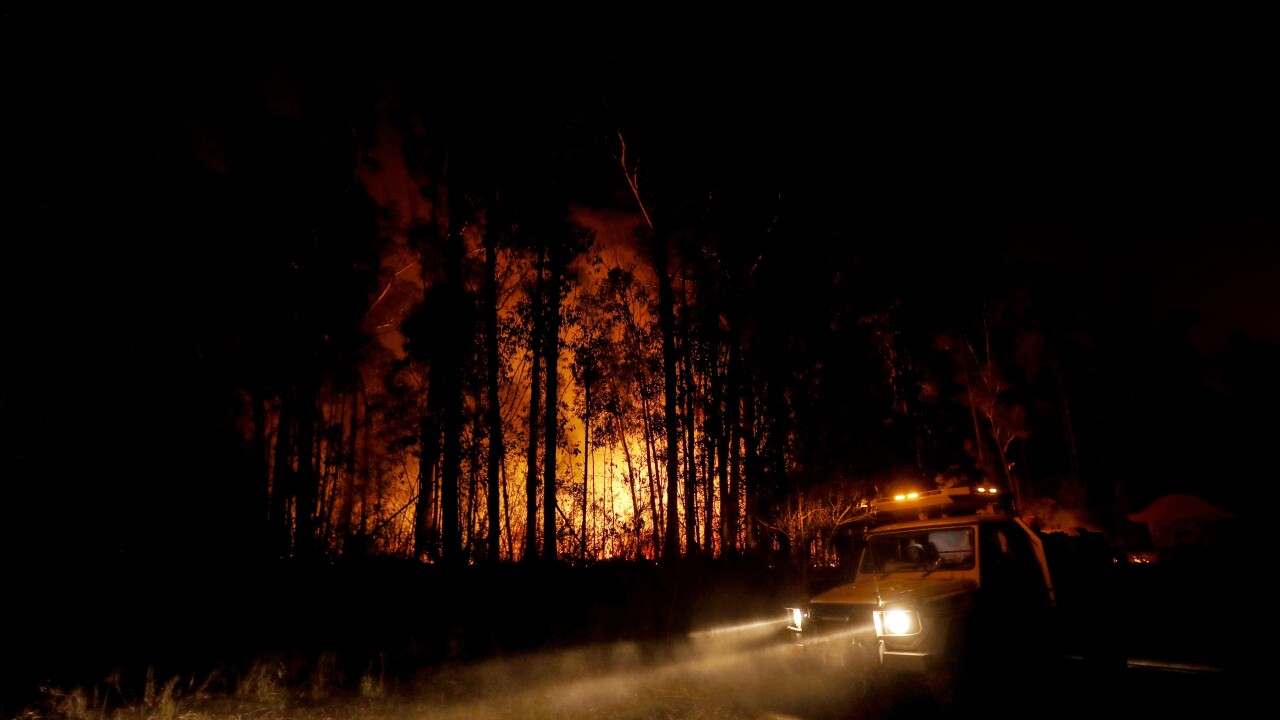 SYNDNEY, Australia (WXYZ/AP) — A new video from the commissioner of the New South Wales Rural Fire Service shows American firefighters being cheered as they arrived at the Sydney International Airport this week.

According to Shane Fitzsimmons, the firefighters are on their way to assist with the firefighting in Victoria.

"Coming through, all gathered gave a spontaneous & lengthy round of applause, reflecting the gratitude & admiration we all have for their generosity," he tweeted.

US fire fighters arrived at Sydney Int Airport this week, on their way to assist with fire fighting in Victoria.
Coming through, all gathered gave a spontaneous & lengthy round of applause, reflecting the gratitude & admiration we all have for their generosity. #NSWRFS @NSWRFS pic.twitter.com/5epg5y4qxX

U.S. officials said Tuesday they're planning to send at least another 100 firefighters to Australia to join 159 already in the country battling wildfires that have killed 25 people and destroyed 2,000 homes.

The National Interagency Fire Center in Boise, Idaho, said that 90 firefighters including on-the-ground hand crews left in recent days to fight fires that have scorched an area twice the size of the U.S. state of Maryland.

Another 100 American firefighters are expected to fly to Australia next week, said center spokeswoman Carrie Bilbao. It's the largest ever deployment of U.S. firefighters abroad, she said.

The Australian Fire and Emergency Service Authorities Council requested the firefighters as part of a reciprocal deal that sent 138 Australians to fight U.S. wildfires in 2018. The U.S. has similar agreements with Canada, Mexico and New Zealand.

Officials are working to send the additional firefighters to Australia quickly so they can assume wildfire management and aviation management roles. The most recent contingent of firefighters dispatched to Australia included crews that fight fires on the ground, based in the U.S. Forest Service's Angeles National Forest in California.

Bilbao said the next group will also include more ground crews and that they are receiving training about poisonous snakes and insects they might encounter while fighting wildfires in Australia.

“They're there to work with Australia in any capacity needed,” Bilbao said.

The National Interagency Fire Center directs the U.S.'s wildland firefighting forces, which include thousands of firefighters who work for the Forest Service and the U.S. Department of the Interior and hundreds of aircraft. Their ranks can be stretched thin during the summer wildfire season, but officials can free them up during the winter to fight fires elsewhere.

It is summer in Australia, where the wildfires have been raging since September, fueled by drought and the country’s hottest and driest year on record. Australia's fires started months earlier than normal.

“We are proud to provide personnel from the United States and will continue to support Australia with the resources needed during this unprecedented fire situation,” said U.S. Forest Service Fire Director Shawna Legarza.

The U.S., Australia and New Zealand have been exchanging firefighters for more than 15 years. The last time the U.S. sent firefighters to Australia was in 2010.

"As the extreme fire danger continues across Australia, the Department of the Interior will continue to do all that we can to support requests for assistance," said Craig Leff, the Interior Department's Wildland Fire deputy director.