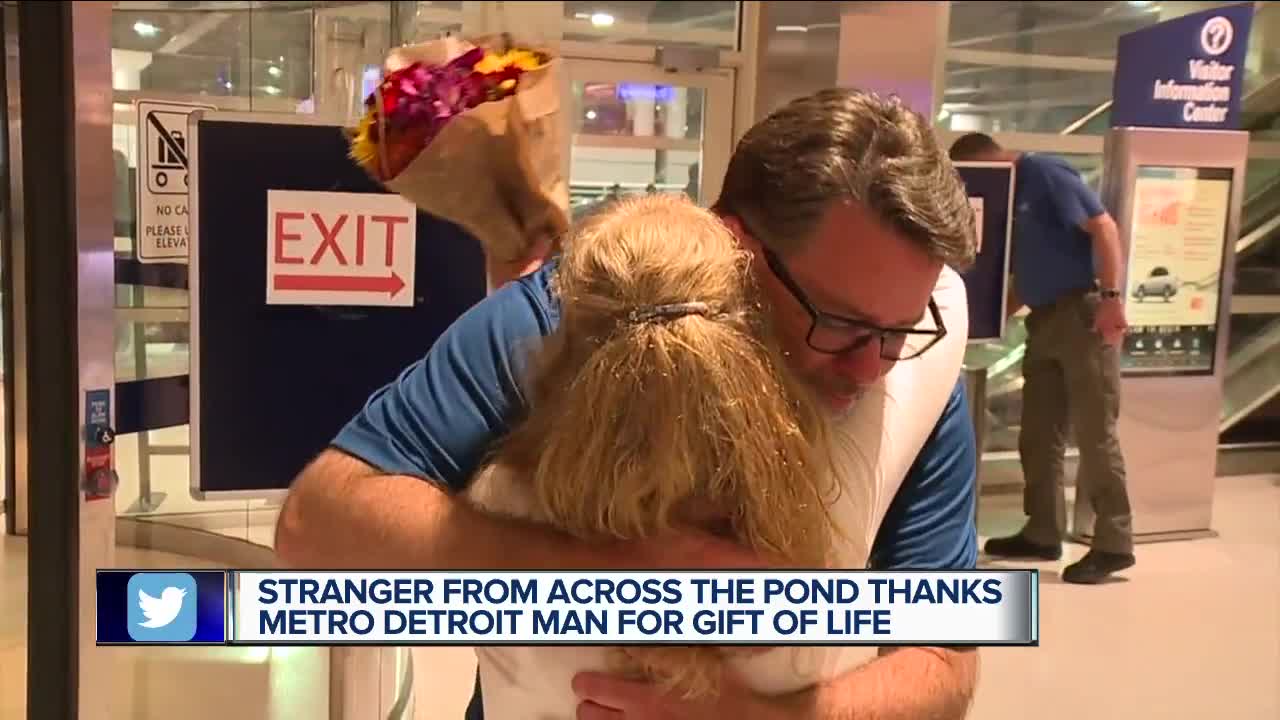 A woman from Great Britain has clown to the United States to thank the bone marrow donor she says saved her life.

ROMULUS, Mich. (WXYZ) — Giving the gift of life is such a precious honor, that’s according to a man in Saint Clair.

Darrin Zohr donated bone marrow to Carol Timmins back in 2014. She finally got a chance to say thank you as they met at Detroit Metro Airport.

“You’re amazing, you truly are amazing and I’m just so, so lucky,” Carol said to Darrin.

Tears flowed down both their faces.

Carol, who lives in England, was in need of a bone marrow transplant in 2014. She spent her days in the hospital waiting to get word if someone would be match.

Darrin and his wife Val had signed up to have their bone marrow tested in hopes of saving their friend, Detroit Red Wing Shawn Burr. They weren’t a match for him and were heartbroken at the idea they could not save him.

Then Darrin got word he could save a stranger from across the pond.

“I don’t feel like I did anything, nothing anybody else shouldn’t do,” Darrin said.

They didn’t know each other, nor did they know this would work. But it did and because of international laws, it took three years to learn each other’s identity.

“It was Darrin, he wasn’t a donor anymore," Carol said. "It was a person and just the friendship we had, I didn’t want to speak with him on a web cam, on a phone; I wanted to see him face-to-face and meet this man that saved my life.”

They finally did on Monday at the airport, with Val and Carol’s husband Paul.

“It’s all a bit surreal for me," Paul said. "On the journey with Carol when she was at the height of her illness it was pretty touch and go."

Carol added, “Life is wonderful and I’m the happiest, luckiest person I’m sure in the whole wide world.”

Val says the fact that both Darrin and Carol are grandparents made all the difference.

Val tells their children, “Do you realize there is another human being walking around today because of your father’s gift of bone marrow? Wish we got on the registry even sooner.”

Darrin added, “For the two days of discomfort I was in to save somebody’s life, I’d do it everyday.”

Carol and Paul will be staying with the couple for eight days before they return to England.