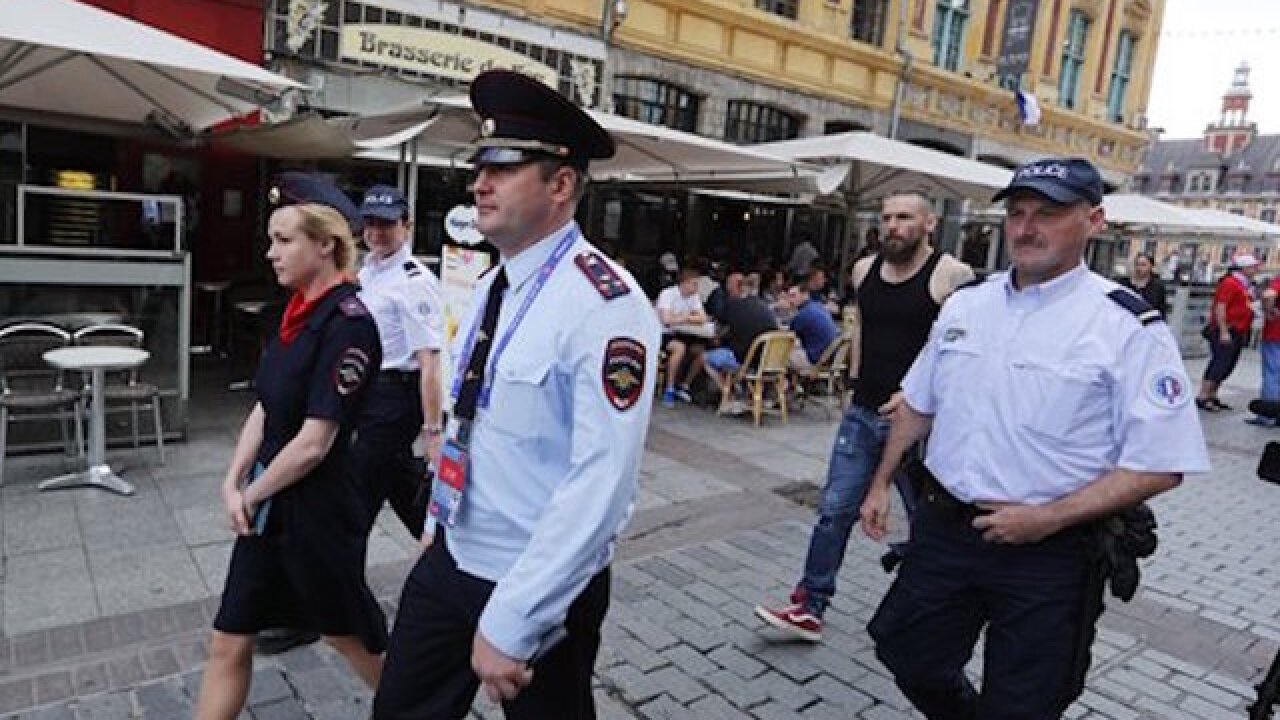 Copyright Associated Press
Darko Bandic
<p>Russian police officers walk through a square in downtown Lille, Wednesday, June 15, 2016 after being called into to bolster security ahead of the Euro 2016 Group B soccer match between Russia and Slovakia at the Pierre Mauroy stadium in Villeneuve díAscq, near Lille. UEFA gave Russia a suspended disqualification from the tournament after violence at their previous match against England in Marseille. (AP Photo/Darko Bandic)</p>

PARIS (AP) — French police and anti-terrorism investigators have been alerted to the possibility that small groups of extremists have left Syria for France and Belgium with plans to stage attacks.

Belgian intelligence services sent a note to French counterparts about the possible groups, and it was sent to police across France on Tuesday, a French security official said Wednesday.

French authorities remain "very cautious" about the information because they receive such notes routinely, the official said.

The official said the information does not change the French government's overall understanding of the threat. France is already under high alert because Islamic State extremists targeted Paris last year and have threatened violence during the European Championship soccer tournament taking place at the moment.

The official, who spoke on condition of anonymity to be able to discuss sensitive security information, had no information about specific targets or how many extremists could be en route.

Belgium's Derniere Heure tabloid reported Wednesday that Belgium's anti-terror office has warned police that fighters with access to weapons could have left Syria about 10 days ago bound for Belgium and France. It was the latest of several recent reports that fighters from Syria could pose an imminent threat.

The paper, which said it had obtained an alert message, said fighters traveling without passports were believed to be trying to reach Europe by boat via Turkey and Greece. A Brussels shopping mall, an American fast-food chain and police could be among their targets.

"We are still on level three, quite a high level of threat," said Benoit Ramacker, spokesman for the Crisis Center. Level three out of a possible four means the threat is considered serious, possible and probable.

Ramacker said, "these kinds of potential targets are under protection anyway" and that "nothing has changed in terms of security."

He declined to comment specifically on the reports, saying only that "there is a lot of information coming in."

Belgium has been on level three or above since November, in the wake of the massacres in Paris that killed 130 people, with extra police and military mobilized.

It's not the first report that fighters might have been dispatched to Europe since the March 22 suicide attacks on the Brussels airport and subway that killed 32. On April 19, Crisis Center chief Paul Van Tigchelt said there were signals from Islamic State that fighters were sent to Europe, including Belgium.

The French official said it is unclear whether the Belgian note could have any link to an attack Monday night by an Islamic State extremist who killed two French police officials.

The stabbing in a Paris suburb revived French concerns about the IS threat. France's president and prime minister warned on Wednesday that the world faces a long war to defeat terrorism.

"I said we were at war, that this war will take a generation, that it will be long," Prime Minister Manuel Valls said on France Inter radio.