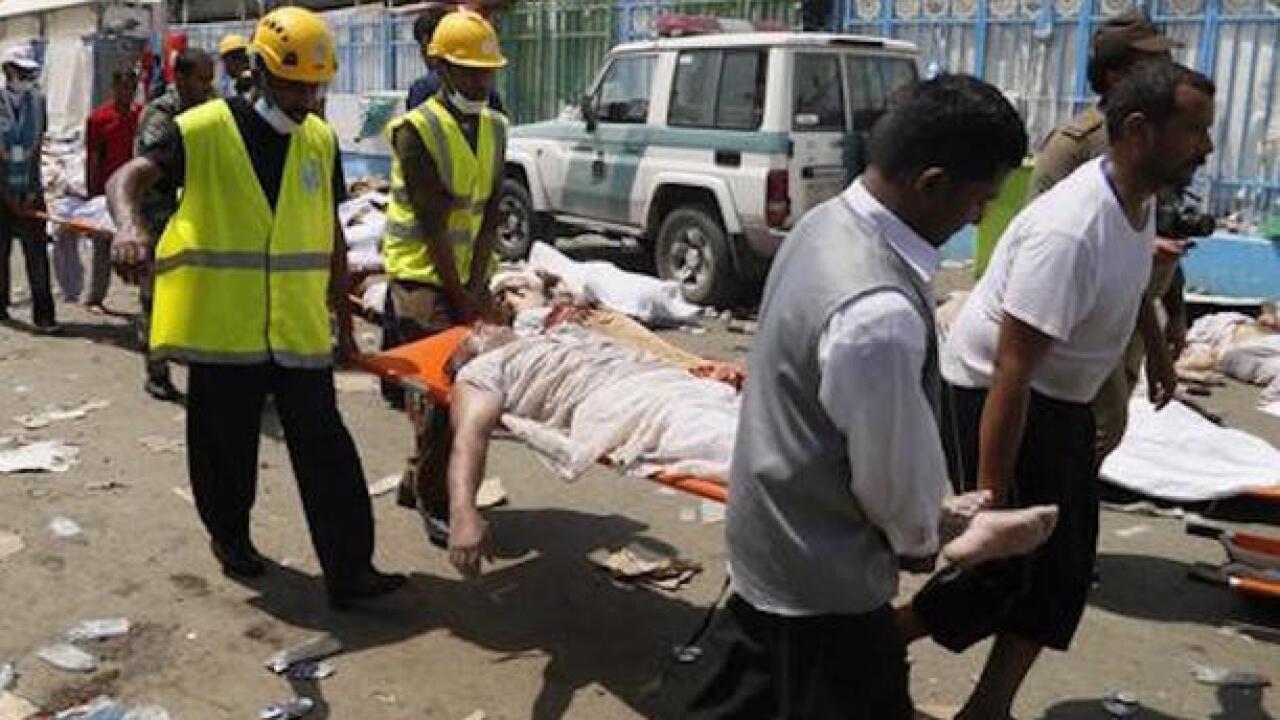 Copyright Associated Press
Uncredited
<p>In this Thursday, Sept. 24, 2015 file photo, emergency services personnel attend to victims of a stampede in Mina, Saudi Arabia during the annual hajj pilgrimage. Iran will not send pilgrims to Saudi Arabia this year for the annual hajj pilgrimage, an Iranian official announced Thursday, May 12, 2016 the latest sign of tensions between the two Mideast powers after a disaster during the event last year killed at least 2,426 people. (AP Photo)</p>

TEHRAN, Iran (AP) — Iran will not send pilgrims to Saudi Arabia this year for the annual hajj pilgrimage, an Iranian official said Thursday, the latest sign of tensions between the two Mideast powers after a disaster during the event last year killed at least 2,426 people.

Iran said Saudi "incompetence" caused the Sept. 24 crush and stampede in the holy city of Mina during the hajj, which is required of all able-bodied Muslims once in their life. The Islamic Republic has said the disaster killed 464 of its pilgrims.

Negotiations between Shiite power Iran and the Sunni kingdom had been trying to "resolve the issue" of security for months, but failed to make any headway, said Ali Jannati, Iran's minister of culture and Islamic guidance.

"We did whatever we could but it was the Saudis who sabotaged" it, Jannati said in comments carried by the state-run IRNA news agency. "Now the time is lost."

The announcement about the hajj comes as tensions remain high between the two countries since the Jan. 2 execution of prominent Shiite cleric Nimr al-Nimr by Saudi Arabia. The kingdom has called the cleric a dangerous terrorist who stirred dissent in the country's predominantly Shiite east, something denied by his family, who say al-Nimr never advocated violence nor picked up a weapon.

Al-Nimr's execution sparked widespread protests in Iran, which views itself as the protector of Shiites around the world. Demonstrations outside of Saudi diplomatic posts in Tehran and Mashhad turned violent, however, and saw protesters storm the buildings.

Since Saudi diplomatic posts remain closed in Iran, kingdom officials had told the Islamic Republic its citizens would need to travel to embassies in other countries to apply for visas for the hajj, Jannati said. He described that as another sticking point in the failed negotiations.

"In the absence of an Iranian consular office in Saudi Arabia following the severance of ties between Tehran and Riyadh, Iran's proposals regarding visa application, air transport and security of pilgrims were not accepted by the Saudi officials," Jannati said.

"If no agreement is reached on these issues, Saudi Arabia will be responsible for shutting the way to sending Iranian pilgrims," Ansari said.

The disaster in Mina was the deadliest in the history of the annual pilgrimage, according to an Associated Press tally of the dead based on state media reports and officials' comments from 36 of the over 180 countries that sent citizens to the hajj. The official Saudi toll of 769 people killed and 934 injured has not changed since Sept. 26, and officials have yet to address the discrepancy.

Iran called for an independent body to take over planning and administering the five-day hajj pilgrimage, but the kingdom's ruling Al Saud family likely would never give up its role in administering the holy sites. That, along with Saudi Arabia's oil wealth, provides it major influence in the Muslim world.

Iran has boycotted the hajj before. In 1987, demonstrating Iranian pilgrims battled Saudi riot police, violence that killed at least 402 people. Iran claimed 600 of its pilgrims were killed and said police fired machine guns at the crowd. Iran did not send pilgrims to the hajj in 1988 and 1989, while Saudi officials severed diplomatic ties over the violence and Iranian attacks on shipping in the Persian Gulf.