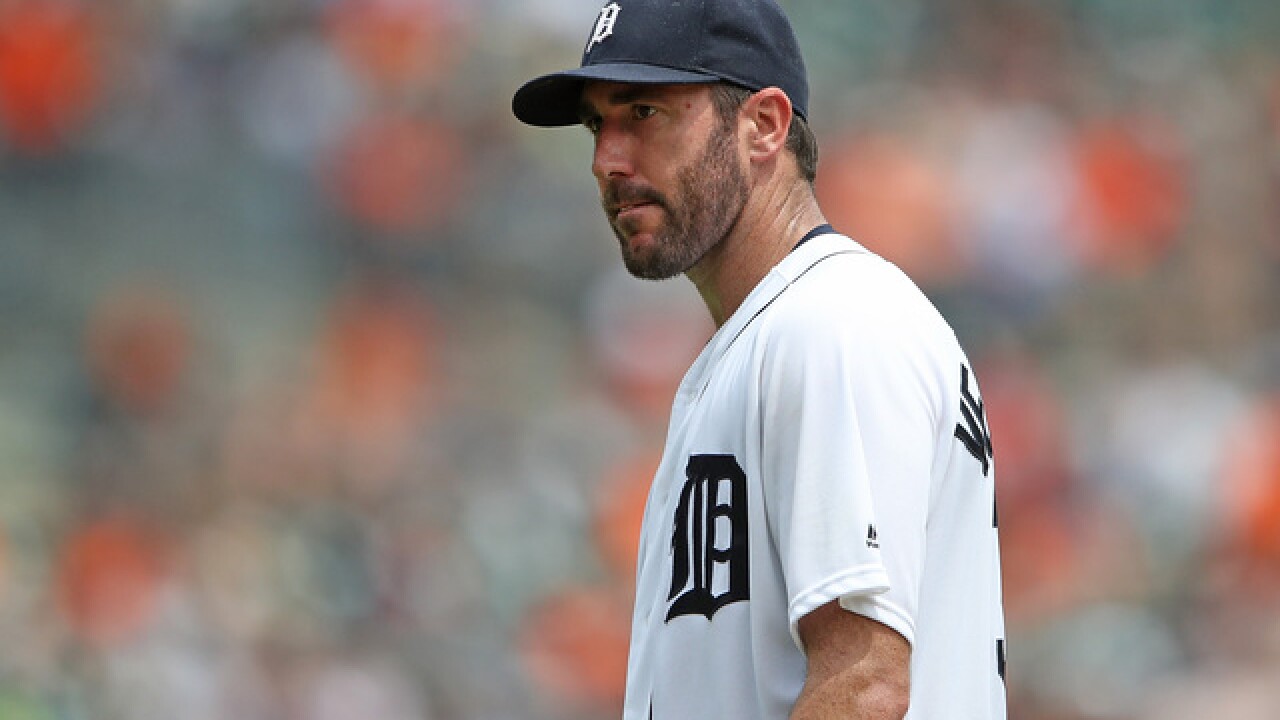 Copyright Getty Images
Leon Halip
<p>DETROIT, MI - JUNE 26: Justin Verlander #35 of the Detroit Tigers walks off the mound after being removed from the game against the Cleveland Indians during the fifth inning on June 26, 2016 at Comerica Park in Detroit, Michigan. (Photo by Leon Halip/Getty Images)</p>

The season is over!

The statement isn't an overreaction to what happened this weekend - the Tigers were embarrassed and swept by the American League Central first-place Cleveland Indians.

In the three-game series at Comerica Park - one in which many believed the Tigers would be able to make a move and turn the season around. Instead, the Tigers were outscored, 22-8. The Indians pounded the Tigers' two best starters - Jordan Zimmermann and Justin Verlander, scoring a total of 15 runs off them.

Against Verlander on Sunday, the Indians hit four home runs in one inning, beating JV and Tigers, 9-3. Verlander became the first Tigers' pitcher to give up four HRs in one inning in history.

Verlander's start you might be able to excuse. After all, he had been pitching pretty well. But you can't pooh-pooh what the team did as a whole.

The Tigers (38-38) - who are now 0-9 against the Indians this season - have done this all season. Win some, lose some. They aren't very good, just a .500 team going nowhere fast. "Well, they own us so far," Tigers manager Brad Ausmus offered up to the media after the debacle, "There's still a lot of time to go."

Don't listen to those who will try to convince you there's so much baseball to still be played, that we haven't yet reached the All-Star break.

Those people said the same things a year ago as the Tigers floundered en route to last place in the division.

The only people surprised by this are those who believed the home reporters who tried to spin this was a good team.

Despite the Tigers spending big bucks in the offseason, the national media wasn't buying this team from the word go.

I didn't buy it, either. Here's what I wrote for the Tigers' preview before the season: First, the good news. The Tigers won't finish in last place in the American League Central - again. Now, the bad news. The Tigers will finish in third place and not make the playoffs.

Of course, some Tigers fans will dismiss this column as an attempt to be negative and ruin the season before it even starts on Tuesday night against the Miami Marlins in South Florida.

It's not. (This prediction is coming from the same columnist who picked the Tigers to go 81-81 last season while most MLB experts picked them to win the division.)

Sure, the Tigers played the role of Big Willie and spent much cash this offseason, signing big free agents Justin Upton and Jordan Zimmermann. They also added closer Francisco Rodriguez and starter Mike Pelfrey.
Still, the Tigers - who were a disappointing 74-87 in 2015 - simply need too many things to go right in order for them to compete in a division they once owned.

There are too many health questions. The core of the team is really old. The chances of their big guys - especially Victor Martinez and Anibal Sanchez - all staying healthy seems far-fetched.

Again, it's the pitching that is the biggest problem on this 2016 team. Starting Rotation: The Tigers used to have the best rotation in MLB a few years ago. It's not even close anymore.

Sure, the Tigers should feel better about Justin Verlander back in the ace role after finishing last season strong.

Sanchez is coming back from injury and has trouble staying healthy. He was hurt to start the spring, but finished nicely. He hasn't started 30 games in a season since 2012 and has never logged 200 innings.

At the back end, it's Pelfrey and Shane Greene. Daniel Norris was supposed to be fifth starter, but he is out with a back issue.

The starting rotation isn't good enough to allow this team to compete for the division, or even a wildcard.

The Indians, on the other hand, have the best pitching in the AL with a lean 3.51 ERA. The Tigers have the 13th-best staff with a bloated 4.60 ERA.

That's why the Tigers are a dismal 6-23 against the seven best teams in the AL. They have a winning record against just one of those teams - 2-1 vs. Blue Jays.

The season is over. All signs point that way. Here was my prediction before the season. I'm sticking with it... The Prediction: The Tigers will struggle and be just a .500 ballclub at 81-81.

Royals win the division for the second straight year. Indians win a wild card from the Central.