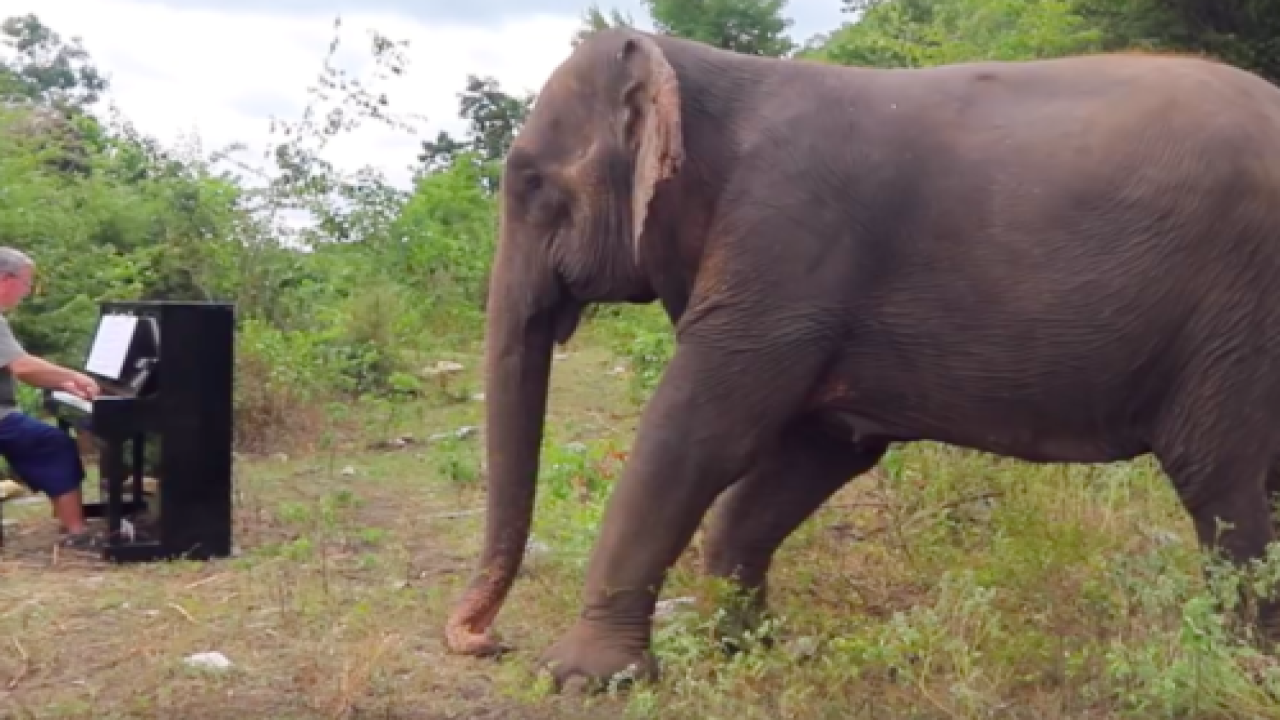 Here’s a story to remind you of the gentler things in the world: A professional pianist in Thailand entertains retired elephants by playing them classical music.

Paul Barton — who is originally from the United Kingdom but is now living in Bangkok — got the idea when he and his wife learned of the Elephants World sanctuary in Wang Dong, Thailand.

“We liked the sound of the place being a retirement center for old, injured and handicapped former logging and trekking elephants,” Barton said in a video. “So we paid them a visit. I wondered if these old rescue elephants might like to listen to some slow classical music.”

After clearing it with the staff, Barton brought a piano to the sanctuary. Here’s an example of the setup:

That’s right: The curious giants can walk right up to Barton as he plays. And, as he points out in his video descriptions, the elephants are free to walk away at any time.

In one of the first videos Barton posted to his Facebook profile, he plays four different songs for Romsai, a bull elephant. During the tapings, Romsai was in musth — a condition similar to a deer’s rut, where male elephants become confrontational and may attack humans without provocation.

But in the video, Romsai is calm. During one segment, Barton plays Beethoven’s “Moonlight Sonata” under the stars. Romsai stands close by, quiet and swaying softly.

Here’s another one, from Barton’s YouTube page, where two elephants, Namwan and Spy, hear piano for the first time. After just a couple notes, they’re squealing and squeezing in for a closer look.

This one got me, too: Barton plays Chopin for Nong Mai, an 84-year-old female who he says is one of the oldest elephants in Thailand. She doesn’t like people much, and her mahout, or trainer, told Barton she might even give him a whack when she hears the music. That’s not what happens. Instead, the grande dame pachyderm stands and listens, seemingly soothed instead of angered.

Since Barton’s story first went viral in 2018, he’s continued to work on his classical recording career, and he still plays for the elephants, too. His most recent video, posted in July, shows him playing some Gershwin for another imposing bull elephant, Chaichana.

Chaichana seems to dig “Rhapsody in Blue!” For more of these sweet videos, visit Barton’s Facebook or YouTube pages.

This story originally appeared on Simplemost. Checkout Simplemost for other great tips and ideas to make the most out of life.

Related stories
Copyright 2020 Scripps Media, Inc. All rights reserved. This material may not be published, broadcast, rewritten, or redistributed.